Today I'm taking part in the blog tour for The Pumpkin War by Cathleen Young :D Thank you so much to the publisher, Random House Kids, for inviting me to take part in this blog tour. And for sending me a free ARC copy of it to read and review. This book looks all kinds of adorable and I am happy I had the chance to read it. Today I'm sharing my review of it and details about the book. I think that you should all get this stunning middle grade book. It's worth reading. It was not perfect to me, but I still enjoyed it a whole lot. A three star for me, but a positive one. A book I think everyone must read. A story of family and friendships.

Review of The Pumpkin War.

When I got the chance to read this book for the blog tour I just couldn't say no. Because that cover is all kinds of adorable looking. It seemed like such a sweet and fun summer book and I could not wait to read it. I ended up enjoying it a whole lot. It was not perfect for me, so I'm giving it three stars, but gosh, parts of this book were so good. And I am really glad I read this story. This was a beautiful middle grade book about family and friendships. About growing pumpkins and caring for bees. It was a pretty awesome read.

It tells the story of twelve year old Billie. We get to know her and her family a lot. Her little sister was so cute. And her parents were mostly great too. I liked reading about them all just being a family and doing life things together. This book is a summer in the life of Billie. We get to see her spend time with all her friends and her family. We get to see her grow her pumpkins to be ready for the race in the fall. There are llamas. And some pretty sweet scenes. I did feel like it could have been a bit more, but I liked it so much.

What this book is most about, though, is Billie and her friendship with her neighbor Sam. They have been best friends since they were born, always doing everything together. But last summer Billie got convinced that Sam cheated in the pumpkin race, that he made her lose, so he could win instead. And she has not been friends with him since then. She has been treating him so badly. I did not approve one bit. But I so enjoyed reading about all of it. How she grew to realize her own mistakes. How she kind of missed Sam.

I only with there had been more about it. More missing. More heartbreak because of it. I wanted Sam to get angry with her. I mean. She had been ignoring him for months and months. I needed more about it all. And yet it was pretty great to read about even so. I liked Sam a whole bunch. He was so sweet and kind. And though they were not really friends in this book, I could still see their friendship. And it was so sweet. I liked the summer part of this book. I really liked the history of the lake they live near. It was interesting.

There was one part of the book that I liked more than anything. And it was written pretty much perfectly. Billie and her grandfather is on a small boat. Then a storm suddenly arrive. It was pretty sad to read this scene. And it felt real and scary. And I enjoyed it to pieces. It almost made me cry too. I wish there had been more about what happened after this accident. Felt like there could have been more. But I was also happy with this scene and how it made me feel. So rude. But so very good to read as well. Liked it tons.

This book shares a lot about how to take care of pumpkins. And how to take care of bees and get their honey too. It was a book about friendship and family and also a little about nature. Which I enjoyed so much. I liked the parts about the pumpkins and how Billie cared for them, watching them grow over the summer. I enjoyed reading about her relationship with her parents and her friends. I wish there had been more of all of it. But this book was short and sweet. And I'm so glad that I read it. You all need to read it.

I will not share too much about what I did not like about this book. But I will share all of it. It's a three star for me because I had some issues with the writing. It was like the book could not decide what kind of way it should be written. It drove me a little insane. The writing was not bad, though, just a little bit annoying. I also wanted there to be more focus on the friendship. And on healing the friendship. There was too little of that for me. I wanted it to be sweeter. But those were my only issues with this book. They were not big.

Okay, honestly, my issue with this book was the way Billie was acting towards Sam. She had behaved this way towards him for months. I was not okay with it. I wanted a bigger scene of her making it alright again. And I did not get that. I'm a little bitter, haha. But I also did not mind too much. Because I liked the ending of this book a lot. The Pumpkin War was not perfect, but it was pretty incredible even so. Biggest thank you to the publisher Random House Kids for sending me a free ARC of this one to read and review. 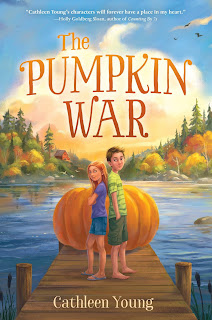 "Cathleen Young's characters will forever have a place in my heart." --Holly Goldberg Sloan, author of Counting by 7s

Former best friends compete to see who can grow the biggest pumpkin and win the annual giant pumpkin race on the lake. A great pick for fans of Half a Chance and Gertie's Leap to Greatness.

At the end of every summer, Madeline Island hosts its famous pumpkin race. All summer, adults and kids across the island grow giant, 1000-pound pumpkins, then hollow one out, and paddle in it across the lake to the cheers of the entire town.

Twelve-year-old Billie loves to win; she has a bulletin board overflowing with first prize ribbons. Her best friend Sam doesn't care much about winning, or at least Billie didn't think so until last summer's race, when his pumpkin crashed into hers as she was about to cross the finish line, and he won. This summer, Billie is determined to get revenge by growing the best and biggest pumpkin, and beat Sam in the race. It's a tricky science to grow pumpkins, since weather, bugs and other critters can wipe out a crop. Then a surprise visit from a long lost relative shakes things up, and Billie begins to see her family, and her bond with Sam, in a new way. 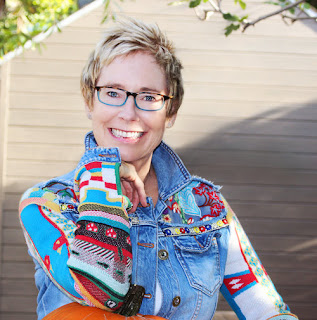 Like Billie in her book The Pumpkin War, Cathleen grew up among storytellers. She often went fishing all around the Badger State with her father, who was a newspaper reporter.  Ever since she was little, Cathleen’s dream was to write for kids.

After graduating from the University of Georgia, Cathleen began writing for magazines like McCall’s and Working Mother. Later, she worked as a police reporter at CITY NEWS BUREAU in Chicago. She then moved into television, writing everything from soap operas like The Young and the Restless to shows like Dr. Quinn, Medicine Woman and MacGyver.

She has over a dozen television movies to her credit, including the award-winning HALLMARK HALL OF FAME movie, A Place for Annie. Cathleen is now the executive director of HUMANITAS, where she gets to help aspiring writers break into film and tv.  She lives in Santa Monica, California, with her twin daughters, Shaelee and Gemma, her husband Patrick, and the family dogs Butch and Rexxy.

It was only after her twins were born that Cathleen discovered her true writer’s voice. 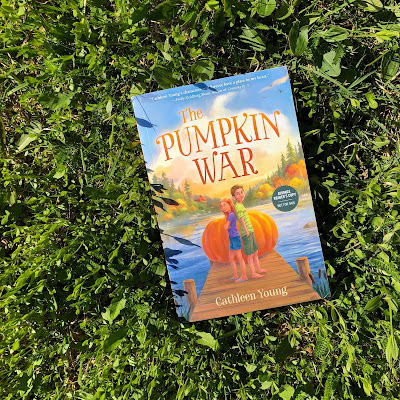