Review: The Girl the Sea Gave Back by Adrienne Young 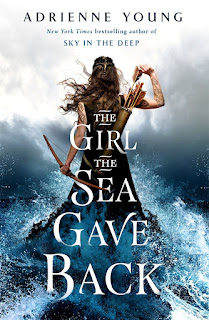 It does not happen often that I finish a book feeling confused. But it happened now. And I cannot even describe how confused I feel right now. I went into this book expecting it to be epic. To be fully exciting and romantic. To be just as amazing as Sky in the Deep, if not better. That's not what I got. At all. I'm beyond disappointed.

I just. I do not understand. I do not understand how I could have disliked this book so much. Why it was so bad for me. Even the cover tricked me. It made me think this one would be fierce. That the girl would be. That it would be about the sea. It was neither of those things. I wanted much more from this book. I'm left wanting.

Which is not a good feeling to have after finishing a book. But oh. There is nothing I can do about it. I did not love this book. I barely liked it. I thought I would give it three stars. But it never got good for me. Not once. And so two stars it is. Which is so breaking my heart. Because I honestly thought I would love this book the very most. Considering that I've now read Sky in the Deep twice and loved it beyond words. And I adore this author. But. Well. The Girl the Sea Gave Back was simply not a good book for me. I wish I could say that I think I'm the only one that will have issues with it. But I don't think so, not really. Because, for me, this book had so many faults. And because I cannot stop myself from being honest, I will share all my thoughts about it. Well, most of them.

There is so much that I need to share about this book. And so much that I am not going to share about it too. I wish I could only say good things. But, honestly, I do not have any good things to say. The cover is gorgeous. I love this author. And that is all the positive things I have to share. Sigh. It was supposed to be such an epic companion novel, set ten years after Sky in the Deep. But it was not. I was supposed to love Halvard. I did not. Was supposed to love the small peeks into the lives of Fiske and Eelyn. I did not. Sigh.

This book tells the story of Halvard and Tova. It is told from both point of views. And there are several flashbacks included into their past. I wish I could say I loved it. But I really did not. I did not care at all for the things that happened in the past. I did not connect with Halvard or Tova. They were truly not strong characters. They were not interesting. They were not soft or broken or exciting to read about. There was not even a romance between them. Sure, one almost kiss at the end, which was beyond awkward. Ugh.

There is so much I want to share about this one. But I'm going to control myself. Ha. I really wanted to love Halvard in this one. I adored him as a child in Sky. But I could not find it in myself to care for him at all in this story. Which breaks my heart. There was just nothing to care about. I felt like I never really got to know this boy. Only that he did not really want to be the next chief, which he was going to be. We see so little of his family. And what we see was bad. He has a few friends, and even that was awkward to me.

Then there was Tova. A girl I was expecting to love. And I did not like her one bit. I did not hate her, I just did not feel anything for her at all. The book begins with her being dead as a child, her clan sending her out to the sea. And then a man from another clan finding her, and her not being dead any longer. He lies to her, yet raises her. She spends her life in this village telling these people their future. They are scared of her. She knows nothing about her past. Well, that is all there is to know about her. Sigh. Wanted more.

This whole book felt unfinished to me. The ending was kind of silly. It was way too rushed. There were not any answers at all. This book felt like half a story. And not the good half. There were things that I wanted to know that were never answered. I'm disappointed. This whole book was about one war. That lasted for, what, half an hour at most. Haha. Yeah. It took place within a few days. Nothing really happened. I did not feel anything for these characters. And I'm so sad about it. I really truly wanted much more from this one.

I went into this expecting it to be as amazing as Sky was to me. I ended up being way too disappointed. The writing was different. I wish I could say it was as great as the first book, but it really truly wasn't. I was not able to focus. There were a bunch of mistakes, which I hope are fixed in the finished copies. But even without those, the writing did nothing at all for me. And in Sky I loved it so very much. I am just confused. So confused. This didn't feel like the same type of book at all. Nothing was the same. I'm so sad about it.

As it was not only the writing that was different from the first book. This book did not have any exciting moments. It did not have a broken character, like Eelyn was. It did not have the same type of strength at all. I even felt like the world was different. In Sky I fell in love with the Viking setting. In this book I didn't even notice it at all, because it was barely there. I just. I have already said too much. I wish this book was different, better. It was simply not for me. It might be perfect for others, but it was so not perfect for me.

Huge thank you to the publisher, Wednesday Books, for approving my request to read this book early. I'm glad I had the chance to. Despite not liking this book much, I am still going to try my hardest to collect all the editions, as I have managed to do with Sky. Because that cover truly is gorgeous. And I need to own it. And I am still going to read the next books by this author. And hoping they will end up being better for me. Crossing all my fingers. I'm curious to know what everyone else will think of this book. Let me know.