Review: We Hunt the Flame by Hafsah Faizal 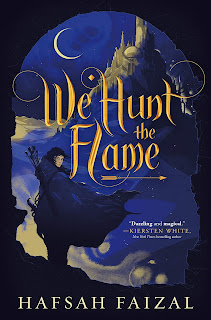 I have been waiting so long to read this. I had every intention of loving it to pieces. But that did not happen. I feel so heartbroken about it. I have known this author for years, and she is adorable. And her book sounded incredible. And look gorgeous too. While parts of it was amazing, not all of it was. At least not to me. Sigh.

I wanted to completely love We Hunt the Flame. But I did not. I enjoyed it so, but no love. Took me many days to finish it. And I just did not have the excitement for it that I wanted to have. But even so. I'm so glad I got to read it. And I will still be getting my stunning hardcover of it, to look at. Giving this book three stars.

Not two, because I truly did enjoy parts of this book a whole lot. But also not four, because I didn't love it. My mind feel conflicted right now. I am not sure how to put my feelings for this book into words. But I will try my best. What I really enjoyed about this one was the setting. I adored this world and all the characters living in it. I liked that this place was separated into five different places where everyone had their purpose. The people were all different and diverse. All exciting to read about. And I very much liked getting to know more about this world, about the magic that it once had. I liked reading about the different cultures. I very much enjoyed reading about all the different food. I don't know much about this culture, but I really want to know even more about it all.

But sadly, I did not like the writing in this book. It was not horrible, but it was not good either. It was sort of a mess for me. It made it harder for me to read this book, as I could not focus for long. But. What I loved about the writing was the Arabic words included. They were written so so well and I always loved learning the new words. I very much enjoyed that. I only had an issue with all the words put together, as I did not manage to connect the way I wanted to. I truly wanted it all to get better, but it never did, not for me. Sigh.

This book tells the story of Zafira and Nasir. It is told from their point of views. I enjoyed getting to know both of them. But gosh, how slow the beginning of this book was. It took ages before the adventure finally started. We got to know the characters a little before that, know all the things about their lives so far. And that's something that bothered me. The romance is supposed to be about Zafira and Nasir. But more than a hundred pages is focused on a boy in love with her, and her somewhat caring for him. It hurt my heart.

Okay, it was not really a love triangle at all. Since the two main characters did not know about each other yet. But I will admit that it hurt my heart to read so many pages about Zafira having an almost boyfriend from home. And then learning about Nasir and his past, about a girl in his life too. It was a little too much for me. Because for me, personally, I do not want to read about past relationships. I so don't want to read about an almost relationship either, when I know the real romance of the book is still to come. It just hurts.

But anyway. I have already written too much about that. I will not say too much about this book. Only that we get to know Zafira and Nasir a whole lot. She is the hunter of her village of snow. They have no food. Only she can get it for them. But almost no one knows this famous hunter is a woman, in this town of men with power. And Zafira is afraid of letting anyone know. She does not want to be forced into marriage. She only wants to save the town by feeding them, save her family and her friends. Zafira simply tries her best.

Nasir is the Prince of Death. The son of the sultan. His assassin. He is the person killing everyone that the sultan wants gone. Criminals, innocents, it does not matter. Nasir must kill them all. And because of this his heart is all kinds of dark and broken. I must admit that I was expecting him to be more dark and broken than he was, haha. After he met Zafira, he was not very dark at all, and I wanted more darkness from him. Instead he was more of a lovesick boy. Sigh. But I still liked him. A whole bunch. Just, no love.

This book also tells of Altair. The sultan's general, whom ends up travelling with Nasir. They are hunting the hunter, whom have been sent on a mission to save magic. They are all going to a dark island full of danger. It was sadly not as exciting as I wanted it to be. Sigh. I wanted more death and pain, haha. But it was still interesting and exciting at times. Anyway. Altair. He was a little bit dramatic and way too rude at times. Yet he was also the character that I liked the most, I think. He was the fun one, and I adored him.

There were a few other characters too, but I'm not mentioning them by name. But do know that they too were interesting to read about. Not perfect, not fully exciting, but still cute. This story is about a mission to save magic. While surviving a dangerous island filled with secrets. And that is all I will say about it. Parts of it were pretty good. But other parts were not. I wanted there to be more exciting secrets. I wanted way more danger. I felt like this book was a little too long with too little happening most times. I needed better.

Although I did not love We Hunt the Flame, it was still a stunning book. And I think many of you will love it the way I could not. Though I very much want to see others be unsure about it too, to know I'm not alone in feeling this way. I wish it had been perfect for me. I wish I could have loved it the way I wanted to. But I did like it a lot. And that the ending was all kinds of rude, which means I very much want to read the next book. Which I hope that I will like more. The biggest thank you to the publisher for my Netgalley approval.