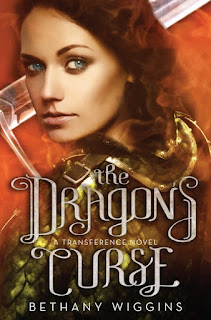 Six months ago, Princess Sorrowlynn stood beside Prince Golmarr to defeat the glass dragon. But when the prince almost killed her after inheriting the dragon's curse of hatred, he went into hiding to keep Sorrow safe . . . from himself.

Now the princess has been training to become a great warrior, with the hope of finding Golmarr. But her search proves difficult when she discovers she has been wed to the prince of an enemy kingdom. Desperate to end her forced marriage and be reunited with her true love, Sorrow must find a way to escape her captor husband. But there's just one more dangerous obstacle in her way. A two-headed dragon is hunting her and will stop at nothing until she is dead.

Can Sorrow summon the courage to wield the only sword that can defeat the beast and save her world from the destruction of the dragon's curse?

Ahh. I cannot wait to read this sequel :D I enjoyed The Dragon's Price so, so much. And I'm dying to know what happens next. Eee. So so excited. Yet beyond nervous too. Six months have passed.. ahh. And sounds like there could be romance drama :( But author promised me there is no love triangle, eee, so I have high hopes for this one. <3 Just wishing I could read it right away :D I'm pretty sure I'm going to love this book. But gah. It isn't possible to pre-order this book yet. How rude. Cover was found here :D
What are you waiting for on this cursed Wednesday?
Posted by Carina Olsen at 6:00 AM