Review: A Shadow Bright and Burning by Jessica Cluess 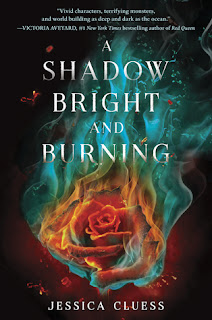 I didn't really know much about this book at all before I ended up with an ARC of book two. And then I decided to buy this one, to give it a try. And I'm glad I did so. I didn't love this book, but I did enjoy the magic a whole bunch. And the world was amazing too. But yeah, I did have some issues with this book too. How rude.

I shall begin with the writing. I had a bunch of issues connecting with this story at first. The writing didn't agree with me much, aw. I grew used to it, but never grew to love the writing, sadly. Hope that will change in book two, though. It was not that awful, just annoyed me a little. I notice the writing the most while reading.

I've decided to give this one three stars. I liked the story a whole lot, but had a lot of issues too. Hmph. I fear that something will bother me in book two, ahh, but also have high hopes about the plot and magic. So fingers crossed I will love book two a bunch. Feeling a bit unsure about what I wish to share about this book. And feeling a bit unsure about how I felt about it. It was sort of a quick read, and I didn't want to stop reading. I was curious about the plot and what would happen next. I liked reading about Henrietta a lot. She was an awesome main character. Had some issues with her feelings, ugh, but besides that I liked her a bunch. I loved figuring out things about her magic and such. Was fun and interesting. And I liked her as a person. She was kind.

But I also didn't love her, because as I mentioned, I had some issues connecting with this book. Mostly because of the writing. Sigh. I need amazing writing to fully connect to characters and things. But even so, I liked this book a whole lot. I loved reading about all the magic. About the sorcerers and magicians. About them finding out that Henrietta had magic, and her leaving her sad and small life to go live and train magic with a bunch of boys. It was fun to read about. I liked reading about her training and such.

And I liked reading about the boys too. They were interesting to get to know. I liked how Henrietta cared for them and got to know them. Though I also felt like there could have been a bit more about them all. And I must admit that I never did like Magnus, the flirt. And that is also why I had some issues. Because it seems like Henrietta is slowly falling in love with him. While also being in love with her childhood friend, Rook. And it just made zero sense to me. Sigh. Magnus was a good friend, for the most part. Not more.

He was an awful flirt and flirted with every girl. Didn't see at all how she could want to be more with him. There is only one kiss in this book. With him. Ugh. Though she does come to realize that she does not really want him. But she still seems unsure, and that bothers me. Then there was Rook. She insisted he move with her. Yet she never has time for him. Yet it seems that they both love each other, in secret. She thinks about loving him often. Sigh. Just never saw why. Didn't get to know him at all. Disappointing. Aw.

I suppose that this book has a love triangle. But it didn't really bother me, probably because I didn't really care about the characters that much, lol. But also because there wasn't a battle with the boys. Henrietta and Rook aren't a couple. They have never kissed. And she's growing closer with Magnus, sure, but she doesn't really love him either. Sigh. But, well, the boy I loved was named Blackwood. Not too much about him, sadly, but I cared about him a great deal, and wanted to know more about him so badly. How rude.

Anyway. Enough about the romance. It wasn't a big deal in the book, as it didn't take much place in the story. Mostly this book was about magic. And the girl learning to use it the right way. See, Henrietta can set herself on fire. And that is all kinds of awesome. And I wanted to read more about that very badly. And oh, this world was so exciting to get to know. There are awful creatures there. Monsters that kill and hurt. And reading about them was all kinds of fun and awful. I wanted to know more. So curious about them all.

Not going to say more about this book, just that I am glad that I read it, despite having some issues with it. I'm crossing all my fingers that I will love book two. A bit nervous, since I know the triangle thing will be a bit bigger, maybe. But hoping it will be amazing even so. It sure do look gorgeous. If you haven't read A Shadow Bright and Burning yet, then I really think you should. It is full of magic and evil creatures and handsome boys. It does not have the best writing, but it was an amazing story even so. I enjoyed it a lot.