Review: The Knowing by Sharon Cameron 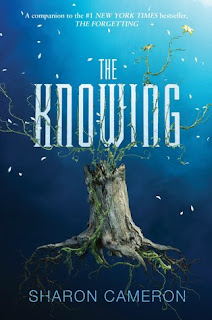 I have been so excited to read this book for ages now. Because I loved The Forgetting so much. I'm still a bit sad that this wasn't a direct sequel, aw. Instead it was a companion book, set around four hundred years in the future. I had hoped to love this just as much as I loved the first one. But oh, I did not. And I feel so sad.

Don't know where to begin. There were parts of this book that I enjoyed a lot. I loved how it was set in the same place as book one. With a lot of the same things, even though this is far in the future. But there were also a lot of things I didn't like about this book. Aw. Because of that, this ended up as a three star for me.

Which makes me incredibly sad. Because I really hoped and thought that I would love this book to pieces. Hmph. And I am heartbroken that I didn't. I am not sure how it was possible that this book was so very different from the first one. I just re-read The Forgetting. And I loved it beyond words. It was so beautiful. Yet the moment I started this companion book, I noticed a ton of differences. The writing was different too. I never fully connected with any of the characters. And that was so disappointing. Ugh. I'm not sure why it was so much different from the first book. But it was. This book is told from two point of views. Samara and Beckett. A chapter each. This change I did like, though, so yay. Mostly loved these two characters too. More on that shortly.

But this book wasn't all bad. Three stars is still good. I will be talking more about some things that I didn't like soon, aw, but will mention first some more things that I did enjoy. Because for the most part I did like this book. I just wanted so much more from it. Anyway. I adore this world the most. So interesting to read more about this whole place, and how it has changed these past years. And get to read more about the Forgetting trees too, and how people are still affected by all of this. I loved that. A lot of it was so exciting.

But, well. The biggest reason for why I didn't love this book was the chapters written from Samara. I really did like getting to know her. She was amazing to read about, and I found her to be pretty adorable. And I wanted to know more personal things about her. Hmph. But, yeah. The way the book was written from her point of view was so annoying. Because Samara is different. She's a Knowing. And so she Knows almost everything. And that word is with a big letter all the time and so often. It got to be too much. Aw.

But I will say that it was interesting to get to know about these new types of people. To read about all the things that Samara had to relive in her head, like she just learned and watched it all for the first time. It was a bit heartbreaking, yet I didn't care too much, aw. But it was interesting to read about, even so. To learn why only some people were Knowing. And how they were thought to be special because of this. Even though a lot of those like this ended up killing themselves. It was a bit brutal. Yet fascinating too.

This book tells the story of Samara and Beckett. Beckett just arrived to this planet from Earth. He and his parents are looking for evidence of what happened to the first people that got sent to this planet, many years earlier. And so Beckett and another girl his age, Jillian, have left their spaceship to look for clues. And, yeah. I had so many issues with Jillian. Which was depressing. She and Beck was supposed to be a couple, but he felt nothing for her. Yet she is a bit jealous and bitter and mean through this whole book.

There were some characters in this book that I just felt had no purpose. Jillian was one of those. She was there just to annoy me. Hmph. Sure, I guess she was important, but I did not like her. No love triangle, not really, just annoying for me. Hmph. Oh, and another boy that was in love with Samara. Sigh. No feelings from her, but he was a creep, and that annoyed me too. No drama like that in The Forgetting. Aw. I feel a bit sad that this book wasn't as perfect, and that I didn't enjoy it as much as I loved the first book. Sniffs.

I'm not sure what I wish to share about The Knowing. I enjoyed parts of the plot a lot. I did like reading about Beckett and Samara. I liked reading about their romance. But I also felt like this book was so much lesser that The Forgetting. And that makes me sad. I really enjoyed the peeks at the past, but those were few. And not what I really wanted. Aw. I hope there will be short stories, one day, about what happened with Nadia and Gray. I want that. I want that very, very much. Because I missed them like crazy in this.

I do think you should all read this book, though. Yet only if you have read The Forgetting. Because while this isn't a direct sequel, only a companion, it do take place in the same place, same world, same type of plot. And it would be much easier to understand things if you have read The Forgetting first. Plus, that book was awesome. I'm sorry that I didn't love this book more. Aw. But yeah, it just wasn't fully for me. But so curious to know what others will think. Thank you so so much sweet person for this precious ARC.