Review: Before She Ignites by Jodi Meadows 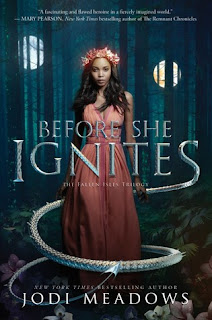 This book is so stunning. And I adore Jodi. I have been waiting ages to read this new book by her. Was sure that I would love it so much, as it sounds amazing. But oh, I ended up being a bit disappointed by this book. Feeling so sad that I did not love it. But yeah, I have a lot of reasons for why I didn't feel love for it.

I've decided to give it three stars. Which is low, yet also seems a bit high too, when I think about the fact that I did not really love anything about the book. Aw. But I did like it. And I did like the story and some of the characters. And I did like the dragons a lot. And I feel like I will enjoy the next books. Well, I hope I will.

I'm not sure where to begin to describe why I had issues with this book. I simply couldn't get into it. I couldn't connect with the characters or the plot. Not fully. I had big issues in the beginning with how it was written, and it just didn't get any better. Aw. The writing wasn't bad, I simply didn't enjoy it. Because I didn't love Mira, the main girl. The whole book is from her point of view. And while I loved so many parts of her, like her anxiety and counting, I also disliked lots of her. Like her vanity and her obsession with being pretty. Then her shame when people looked on her when she wasn't pretty. It bothered me so much. Because she did not improve. She is also so whiny and cries for everything. She cannot lie. And she doesn't do anything important or big or heroic.

But I didn't hate this girl. I just had issues with her. Aw. I also liked her a lot at times. I just felt she was a bit too little as well. Which was depressing. As this book is about her being almost worshipped by everyone her whole life. Mira was born when the treaty was made and named after her. Everyone seems to adore her. But this book does not focus on her past life. Because instead it focuses on her right now, and right now she's being put in prison for something she said. Which, well, didn't make much sense. Weird laws.

Almost all of this book takes place in the pit, an underground prison. And oh, it grew to be a bit too much for me. Because so little happened. Was supposed to be a torture sort of place. But I felt like the villain in the prison, Altan, was a bit too little. He almost never hurt Mira. Which was disappointing. He just wasn't scary. Not to me. And that was disappointing. Ugh. Still, sort of interesting to read about even so. I didn't hate him. Which was also wrong, haha. Should have hated him. But yeah, I did not. Sigh. Disappointing.

This book is supposed to be about dragons as well. And it is. But they are such a small part. And I'm so sad about that. Because dragons are awesome. And I loved reading about the dragons in this book. I just wish they were there more. Hmph. And wish they had more awesome names, hih. But I adored reading about them. Just, yeah. Hope they are a bigger part in book two. Fingers crossed. Felt like this book was more of a prequel, despite being so, so long. Which was a bit disappointing. But excited for the next one.

Mira is in this prison for around two months. While I felt sorry for her and the other people in the prison, I sadly didn't care that much about it. Aw. Some parts were a bit horrible, but mostly it was just boring. So little happened. Mira tried to make friends with a few of her prison neighbors. Like Gerel. I liked that girl a lot, because she was simply more. Then there was Aaru, a silent boy next to her. I didn't care much for him at all. Only felt like he was a skinny and silent child. Aw. But I liked their growing friendship. Well, mostly.

And then there was the romance. Or the lack of. As there was none. And I made the mistake of reading a review that said someone was the love interest before I started. Turned out to be wrong. Sigh. But even if I hadn't read it, I still wouldn't have connected to the other boy, aw. At least Jodi says no triangle, so that's good. Except not good if this boy will be the romance, because I felt nothing for him. I liked how he thought her a secret code to talk, except I felt she learned it way too fast. And knew it too well afterwards. Hmph.

There were other characters too. Like the two best friends of Mira, from back home. Hristo and Ilina. And I thought Hristo would be the love interest. But he wasn't. Aw. But I want him to be. Sigh. He have been the official protector of Mira for years. And they are great friends too. He seemed awesome. But didn't get to know him at all. Ilina seemed so great too, but also didn't get to know her at all. Sigh. Despite Mira having been best friends with her for years. Rude. Maybe I'll get to know them both in the next book. Well, I hope.

Then there were Mira's parents. I think they love her. But barely see them. Mira always thinks that her mom would be so ashamed of her. Was a bit too much for me. Anyway. Enough about this book. Already written so much. It wasn't awful. I liked parts of it a lot. But didn't love it. Hoping that the next ones will be amazing. This cover is stunning, though. Huge thank you to Jodi and HarperTeen for the most amazing ARC that they sent me. I'll love it always. And buy finished copies too. Anyway. I do think you should read this one.