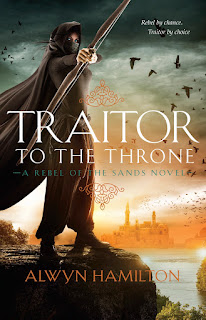 The sizzling, un-put-downable sequel to the bestselling Rebel of the Sands!

Mere months ago, gunslinger Amani al'Hiza fled her dead-end hometown on the back of a mythical horse with the mysterious foreigner Jin, seeking only her own freedom. Now she's fighting to liberate the entire desert nation of Miraji from a bloodthirsty sultan who slew his own father to capture the throne.

When Amani finds herself thrust into the epicenter of the regime—the Sultan's palace—she's determined to bring the tyrant down. Desperate to uncover the Sultan's secrets by spying on his court, she tries to forget that Jin disappeared just as she was getting closest to him, and that she's a prisoner of the enemy. But the longer she remains, the more she questions whether the Sultan is really the villain she's been told he is, and who’s the real traitor to her sun-bleached, magic-filled homeland.

Forget everything you thought you knew about Miraji, about the rebellion, about djinni and Jin and the Blue-Eyed Bandit. In Traitor to the Throne, the only certainty is that everything will change.

Eee, I cannot wait for this one :D I adored book one, Rebel of the Sands, a whole bunch. And I simply can't wait to read this sequel. It's going to be amazing :D Especially since Alwyn said there would be no triangle between main couple, lol. So excited. <3 The cover is new, though. See reveal here. I'm not sure how I feel about it.. I don't like cover changes. Aw. But I also do think this one looks really pretty :D I like it. Anyway. I'm super excited about this book. And over 500 pages! Ahh. I cannot wait :D I shall love it.
What are you waiting for on this exciting Wednesday?
Posted by Carina Olsen at 6:00 AM