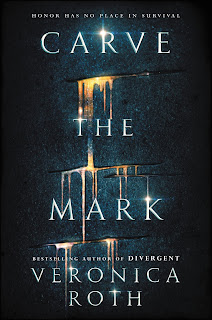 CARVE THE MARK BY VERONICA ROTH

On a planet where violence and vengeance rule, in a galaxy where some are favored by fate, everyone develops a currentgift, a unique power meant to shape the future. While most benefit from their currentgifts, Akos and Cyra do not — their gifts make them vulnerable to others’ control. Can they reclaim their gifts, their fates, and their lives, and reset the balance of power in this world?

Cyra is the sister of the brutal tyrant who rules the Shotet people. Cyra’s currentgift gives her pain and power — something her brother exploits, using her to torture his enemies. But Cyra is much more than just a blade in her brother’s hand: she is resilient, quick on her feet, and smarter than he knows.

Akos is from the peace-loving nation of Thuve, and his loyalty to his family is limitless. Though protected by his unusual currentgift, once Akos and his brother are captured by enemy Shotet soldiers, Akos is desperate to get his brother out alive — no matter what the cost. When Akos is thrust into Cyra’s world, the enmity between their countries and families seems insurmountable. They must decide to help each other to survive — or to destroy one another.

I must admit, I'm pretty excited about this book :D For so long Divergent was the best book I had read. It isn't my top favorite any longer, but I still love it so so much. I loved book two as well, though not the third one, sadly. But even so. I own such a huge collection of these books :D And I love Veronica Roth. And I actually got to meet her three years ago, the only time I went to America, on a holiday. At the same time as Ascendio :) I was only there for the authors, though, lol. Which was pretty awesome. But aaaanyway. I think this new book sounds SO AWESOME. And it looks so pretty. And I am going to love it. I know it. Also love the cover reveal post for it here :D I just hope this book will end up being amazing.
What are you waiting for on this golden Wednesday?
Posted by Carina Olsen at 6:00 AM