Review: Tell Us Something True by Dana Reinhardt 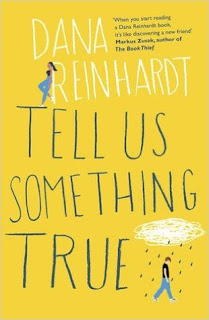 Sigh. I'm not sure where to begin with this book. When Cailin asked me about reading and reviewing it, I was a bit unsure, yet I wanted to give it a try, because it looked and sounded sort of cute. Plus it wasn't all that long. So I was excited about reading it. But yeah. I ended up being very disappointed. Which sucks.

I guess it is because I don't really like this genre at all. I'm not sure why, but contemporary books are not for me. I don't enjoy them. But. I have also loved a few precious few from this genre, and I had hoped this would be another one of those. But it was not. And I have so many reasons for why. I shall try to explain.

This book is told from the point of view of seventeen year old River. Sadly, I did not like the writing all that much. It wasn't bad, but it wasn't good either. It felt like he was telling the story about his life, and he never stopped telling it, and that bothered me. It just wasn't written all that well to me. But I didn't hate it, so that's good, lol. But yeah. This book wasn't all that good at all. I'm giving it two stars, because I did not like it. At all. But I also did not hate it, so yeah, one star would not do. But this is a book I would not read again, sadly. And I have so many reasons for why this book was so bad. I thought it would be good. It sounded pretty good. Was told that River was a great boy to read about. But hahaha. He was not. I did not like this boy.

I can't help but feel this way. River was not a good boy at all. Yeah, it begins with him getting dumped by the girlfriend he had for about two years. Which he didn't see coming at all. But gosh. He was so not nice. At least not for me. He got dumped. He then started walking home, and stopped at a place for teens with addictions. Which he loves going to. But. He starts lying. He pretends he has an addiction. And it is so not nice of him to lie for weeks to them all. It was really shitty of him to do, to be honest.

But that isn't the only reason for why I did not like this boy. After he was dumped, he started stalking the girl, Penny. He showed up at her house several times. He bought her soup and flowers. He just did not understand that she broke up with him. He kept thinking about her all the time, how he would get her back. And his ideas were so stupid and a bit rude and it bothered me so much. He should have left the girl alone. She didn't want to be with him anymore. Sigh. And I understood why she didn't want to. Ugh.

But then later on it was shown that she wasn't really a nice person, and he was better without her, but yeah, I didn't like that. Because I thought she seemed nice. But Penny and River did not fit together at all. He spent those two years only with her, and sort of threw away his three friends. It was not nice of him at all. Ugh. I just. There were so many things that bothered me about this boy. I just could not seem to like him. But I did like him a few times, but not enough. River was just not someone I could ever like.

The entire plot in this book was about River trying to get over Penny. Except he wasn't really trying at all. And about him going to the support group. Which was pretty interesting to read about. I was curious about the other kids. They seemed nice. But I didn't like the way River thought about them sometimes. Sigh. And then there was the new girl, Daphne. I'm unsure about her. I liked her. But I didn't know her enough to love her. Shrugs. It bothered me how quickly River fell in love with her, though. Annoying.

I'm not sure I like how River treated Daphne. First they were just friends. For a short time. And then suddenly he has feelings for her. And then one day she's having a really bad day, which he knows, and yet he doesn't really ask her about it, and instead starts talking about how he really likes her. And then he tries to kiss her. And oh my gosh. It was the worst timing in the world and I sort of hate him for it. Ugh. Just. Yeah. He wasn't a nice boy. Shrugs. Though I know that others will end up loving him. But not me.

Sadly, this wasn't a book for me. But I'm glad I tried it even so. But yeah, probably not reading many more books from this genre, lol. Not for me. But I do think others will enjoy this book a lot. Curious to know what others think of it. Let me know :) Thank you so much to Cailin at Rock the Boat for sending me this gorgeous print ARC for review. <3 It means the most. And the book looks so gorgeous. But yeah. Tell Us Something True was simply not a book for me. It's such a pretty book, though, and quick to read.