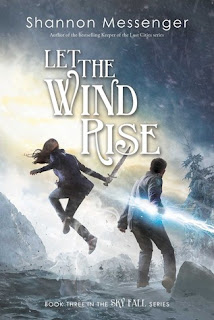 The breathtaking action and whirlwind adventure build to a climax in this thrilling conclusion to the “remarkably unpredictable” (BCCB) Sky Fall trilogy from the bestselling author of the Keeper of the Lost Cities series.

Vane Weston is ready for battle. Against Raiden’s army. Against the slowly corrupting Gale Force. Even against his own peaceful nature as a Westerly. He’ll do whatever it takes, including storming Raiden’s icy fortress with the three people he trusts the least. Anything to bring Audra home safely.

But Audra won’t wait for someone to rescue her. She has Gus—the guardian she was captured with. And she has a strange “guide” left behind by the one prisoner who managed to escape Raiden. The wind is also rising to her side, rallying against their common enemy. When the forces align, Audra makes her play—but Raiden is ready.

Freedom has never held such an impossible price, and both groups know the sacrifices will be great. But Vane and Audra started this fight together. They’ll end it the same way.

It feels like so long since I read book one and two in this series. Ack. But it haven't really been that long. And I still remember how much I enjoyed them both. But also how mean the second one ended. Ack. And I have waited so so so long for this one. And now it is almost here :D Yay. I cannot wait to read it. So curious and nervous to find out how it all ends. Ack. Fingers crossed that it will be amazing. <3 There is a chance that I'm still sad about the cover changes. Sniffs. But it is still pretty. See new covers here :)
What are you waiting for on this windy Wednesday?
Posted by Carina Olsen at 6:00 AM