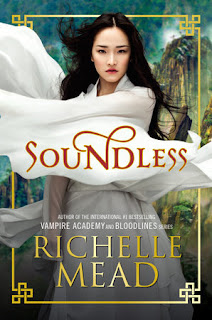 I'm not sure what I felt about this book. I had expected to love it. And I was disappointed. Especially since I had paid so much for this hardcover. And this book looks and sounds so amazing. I thought I would love it. But I didn't. And this bothers me a lot. As I expected more from this book. Hurts that I didn't love it.

This is the first book I have read by Richelle Mead. And I'm sad to say that it might be the only book I read by her too. Though I own her first series. But that is the one I don't want to read, because love triangle. But yeah. I don't think her books are for me. Because I really didn't like her writing in this one. At all.

I'm unsure about what to rate this book. I think I'm going to give it two stars. Which is just breaking my heart. I had thought about three stars, but then I began thinking about the book. And I must admit that there were more things I did not like about it, than things that I did like. So yeah. It wasn't a positive book for me. I wish it had been better. And I feel like it could have been so much better too. Sigh. I just did not love this one. But I didn't hate it either. I found the plot to be interesting most of the time. But it was never exciting. Nothing big ever happened. No amazing moments. Most of the book was boring. And I kept waiting for something to happen. But nothing ever did. Hmph. But I also wanted to know how it ended.

So I cannot say that this book was all bad. But I also can't say that I loved it. Because I didn't. I'm just a bit unsure how much I liked it. But I do know that this isn't a book that I will remember. Because I felt like nothing big ever happened. It was mostly a slow book. And a bit boring. And sometimes I wanted to stop reading. Yet at other times I liked the book a lot. But my biggest issue was the writing. I simply couldn't stand the way it was written. I felt just about nothing for the main girl. Writing was so bad.

Then there is the plot. This book is about Fei. She lives in a village on top of a mountain, where they are all deaf. And some are going blind too. Which was just all kinds of heartbreaking. Yet I never felt much for these people at all, because of the bad writing. Sigh. I felt like it could have been done better. Yet I also liked reading about it all. I liked how these people were deaf, but were still really amazing. I loved how they signed to each other. I did not like how things were run in the village. It bothered me.

I'm probably not going to be able to describe this book very well. And I might end up using less words than I'm used to. I'm not sure yet. I just know that I don't feel like talking about this book very much. Sigh. But I shall try. Main girl, Fei, was an interesting character. I think I liked her. But I never loved her. Because I felt like I didn't know her very well at all. I know she paints well. And her parents are dead. And her sister means the most to her. But that's it. I just wish I could have gotten to know her better.

There is also a boy in this book. And while I liked the romance, though there wasn't all that much of it, I didn't love it. But the boy was pretty awesome. Yet I didn't really know him at all either, so that bothered me. This is all probably because the book is less than three hundred pages. Which feels way too little for me. So much more should have been included. About the characters. And about the world. I needed to know so much more. But I got to know so little. And that still bothers me a bunch. Wanted more from it.

I'm not sure how to talk about the plot. Village is small, but they are all deaf. Have been for ages and ages. And they cannot leave the mountain, because it is so high up, and way down has been destroyed. They use a line to trade tons and tons of metal from their mine against a little bit of food each day. That bothered me too. That they never thought more about it. And it bothered me that I got to know so little about it too. I wanted to know more. Sigh. But there isn't any more. And I'm sort of glad for that too.

This book is about Fei starting to hear. She is the only one. And. Well. I guess it should have been so exciting to read about. But it wasn't. Because she spent days telling no one. And it wasn't written very well at all, with what she heard and stuff. It just bothered me. But I did like reading about it even so. Hmm. Fei and the boy wants to help their village, and so they climb down the mountain. And meets people. And it wasn't nearly as exciting as I had hoped and wished it would be. It was very disappointing.

And now I'm getting tired of writing about this book. I was disappointed with it. I wish it had been so much better. The plot was slow. And nothing much really happened. It was more focused on the almost romance, and how they both had feelings for each other, and knew each other as children. I didn't even love that. Which just makes me sad. But yeah. This book wasn't all bad. I did like Soundless. I just did not love it. And so I end up giving it two stars. Which is making me upset, lol. Really wanted to love it.