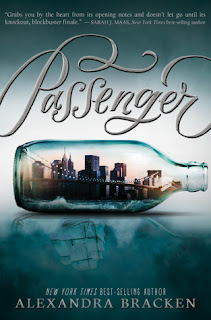 This book is so gorgeous. And I have wanted to read it for months, as I have been hearing amazing things about it for so long. I didn't get a review copy, so had to wait for my hardcover to arrive before I could read this one. My copy is all kinds of gorgeous. And oh, I did like this book a lot. But I didn't love it.

I'm not sure what to say about this. I have so many thoughts about it. And I'm so unsure about how to rate it. So I'm going with three stars. But I liked it a whole bunch. But I also didn't love it, and there were some things that bothered me, and so I cannot give it four stars. It just feels like too many stars. Sigh.

I liked the writing in this book from the very beginning. So I'm very happy about that. It was written in a good way. And I liked the characters a lot too. They were all pretty awesome. And the plot was so exciting and interesting too and I enjoyed that so so much. But. Well. This book is too long. And it has a bunch of boring parts. The most exciting things that happened were right at the end, and then the book was over. Ugh. I felt like so much didn't need to be in it, as I found myself not really reading some of the pages, as it was so boring. Sad face. But that didn't happen all the time. Because this book did have some exciting moments. And I found the romance to be all kinds of beautiful, so there's that. But also, I really did like this book a lot.

This is a story about time travelling. It is told from the point of view of Nicholas and of Etta. Both whom I enjoyed reading about so much. And I ended up loving them both a lot. Especially together. Nicholas is from the past, and Etta is from present time. I liked reading about how Etta found out about how she could travel in time, and how it works, though her way of finding out was brutal and a bit heartbreaking. And mean. I really didn't like Sophia. She was a pretty bad person. Sigh. But interesting to read about.

While this book is slow, it is also interesting most of the time. Though, yes, I did have a lot of trouble focusing on it. Yet I didn't mind all that much. I liked the parts that take place on a ship, and everything that happens there. I liked the different times they travelled to, and all the different things they saw. I loved that Etta was white and Nicholas was not. But oh how I hated how people treated him because of it, back in time. It was so heartbreaking. Some could be so cruel. Nicholas did not deserve it. Sad face.

I'm not sure what to say about the plot in this one. I don't feel like writing down all the things. But I shall try to explain even so. There is time travelling. And there is also a man in charge of all of it. As there is only about a hundred travellers left. And ah, this old man was pretty awful. Though we didn't get to read about him all that much. Yet I knew enough to know that he was such an awful person. Shudders. There were a lot of bad people in this book. I disliked them a lot. But there were also kind ones that I did like.

The story is that Etta has been kidnapped through time by Sophia. To be taken to the man in charge. Where she learns she has to track down an object, or else they will kill her mom. Which was pretty usual, yet interesting to read about even so. I liked her journey to find this thing. How her mom had left her a letter with clues. Though it bothered me a bit that no one else figured out what she had written. Ugh. It seemed to me they only needed to look at the letter a bit more to figure it out for themselves.

But anyway. I found the characters in this book to be interesting to read about. And I adored Etta and Nicholas. The plot was exciting, sometimes, and I wanted to know what would happen next so badly. The ending is so mean. And I'm simply dying for book two. And oh. The romance. I loved it a lot. There is no love triangle. No hint of one either, thankfully. But there is a great romance. And no drama either, yesss. And there is also kissing. And more. And I'm so thankful for that. Bothers me when there isn't more, lol.

So anyway. I'm giving this book three stars. But this time that doesn't mean that the book was bad. Because it wasn't. It was actually pretty amazing. But I just didn't love it, and I had some issues with it, and I don't feel right giving it four stars. Sigh. But I must say that I am dying to read the sequel. Truly dying to read it. I think and hope that I will love it lots. Fingers crossed. I just hope it will all end good. I suggest that you all read Passenger. Because it was truly an awesome book, despite not being perfect :)