Review: The Island by Olivia Levez 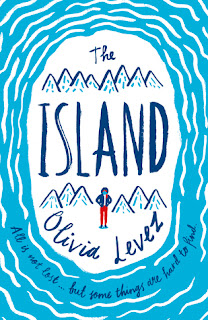 I feel bad about giving this book a one star. But I can't help it. It was awful. And I didn't like it at all. Though there were a few scenes that were interesting. But not enough to give it a two star rating. Sigh. I have so many thoughts about this one. I shall try to share them all. Maybe. It's just. I really wanted to like it.

I heard about The Island when I was emailed by the UK publisher in November, if I wanted to review it. And I read about it. And I thought that I would like it, so I got an ARC of it. It is pretty. But oh. Sadly, the inside was not good at all. I tried my best to enjoy this one. But it was impossible. It just didn't work for me at all.

I knew from the first pages that I would not like this book. I wanted to not read it. But it is only the second book I have gotten from this lovely publisher, and I thought that I needed to finish it and write a review. And then I thought about DNFing it, as it was so slow to read, but I didn't. I wanted to finish because I got it for review. And. Well. I sort of regret reading it. But also sort of glad that I did. But I'm also having so many feelings about it right now. And none of it is good. I'm just angry. And my review might end up being very negative. Sorry about that. But I wish to be honest about my feelings for this book. So I might end up posting a few small spoilers about the plot in the book. But nothing too big and not that interesting.

I'm unsure where to start. So I shall begin with the writing. It was awful. Really truly awful. I couldn't stand this writing at all. Which makes me a bit sad. But yeah. It was really bad. I'm not sure how to else describe it. But everything about it was bad. How the girl was thinking. How she described things. I don't usually have issues at all with strong language, but it was bad in this one. It didn't fit in at all. I just really did not like the writing. At all. And story was not all that exciting either. I'm disappointed.

I don't even know how old the main girl, Frances, is. She drank vodka a whole lot. She seemed like she was over eighteen sometimes, and other times she seemed like she was twelve. It was so annoying. But pretty sure she was supposed to be sixteen. Reading about her was the worst. I guess I was supposed to feel sorry for her, you know, with her fat and useless and pathetic mom who got paid for sex. It just seemed a bit too much. And I didn't care one bit. Not even a little. I did not like Frances. Which is sad.

The plot is about her being on a plane that crashes, and her being the only survivor. But gosh it was written so badly. First she manages to get out of the plane by making a hole in the roof. Did not seem likely. She grabs a raft. And then she wakes up inside it. She has one small bottle, with a bit of vodka inside. So of course she drinks it all and gets super drunk. Did not seem likely. And she destroys just about everything inside her one emergency bag. Seriously. It was done so badly and not realistic at all.

This book is about her being on an island. Alone for about two hundred pages, and about eighty days for her alone. Just about half the book is flashbacks. And it was just annoying. I didn't care about her life. Her little brother seemed interesting, until he got taken away and then didn't care about her at all anymore. Seriously. Plot is that Frances did something really bad and is being sent away for weeks. But, well, the thing she did was so silly and just stupid to read about. I didn't care about it one bit. Sigh.

This summary mentions another survivor. But he isn't there for two hundred pages. And then he is just annoying. And Frances is being so rude and awful. She is sixteen. He is over twenty. I thought there might be a cute romance to save me from this awful book. But nooo. Turns out he is gay. Ugh. My dislike for this book just grew so much. Because it was boring. Oh so boring. They spent forever on the island doing just about nothing. Nothing exciting ever happened. Which bothered me. Could have been better.

And then there is that ending. What the hell. It is a cliffhanger. Someone is just about dead. And we don't get to see what happens with it at all. It was the worst ending I have ever read in a standalone book. Just. What. That is not okay. And it just made me so angry. Sigh. I spent ages reading this book, suffering through it, and then it doesn't even have a good ending. What the hell. I'm upset about it. And just. I felt like I wasted my time. Though I was interested in the plot a few times. Sort of. Not enough.

I'm not sure what else to say about this one. Well, okay, I could probably mention a whole lot of other bad things about it. But I'm not going to. Because I'm ready to forget all about it. I'm sorry that I didn't like it. I'm sorry that it was such a bad book. But yeah. It was not for me at all. Some of the survival things were interesting. But for the most part it was boring. Some might like it, though. Just. Thank you so, so much to Cailin at Oneworld Publications for sending me this. <3 I'm sorry that I hated it.