Review: Girl Against the Universe by Paula Stokes 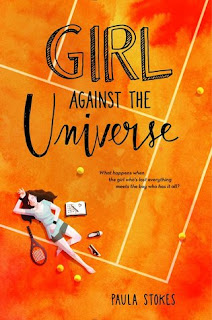 I got this one from Edelweiss as I had heard a few people love it a lot. And I thought that maybe I would love it lots too. Even though this genre is not my thing. But I have loved a few books like this one. Sadly, I did not love this book at all. And it makes me a bit sad. I wanted to love it badly. But that didn't happen.

I have been trying to decide how I felt about this book. And I just. I'm having mixed feelings. I liked the writing. I somewhat liked the romance. But I think it was too boring and a bit silly and it also had that usual contemporary break up around the middle. Ugh. I can't stand that. It made me like it less. Sigh.

I had been considering giving this book three stars. But I can't. When I think about it, I don't feel like giving it more than two stars. Which makes me a bit sad. But it is what it is. I didn't love it. I enjoyed it most of the time, but I never loved it. And I wouldn't have minded if I had stopped reading it either. Sigh. I'm not sure how I will talk about it. Because I don't feel like much happens. And so I don't think I have much to talk about at all. But I will try. Because I did have a lot of feelings about this book. Just not the feelings I wanted. I had seen that people had cried while reading it. I did not. I did not swoon. Or anything. Well, okay, I was annoyed pretty often, lol. One good part was that there was no love triangle at all. I'm happy about that.

This book is told from the point of view of sixteen year old Maguire. She was a bit interesting, but I never loved her. Which makes me a bit sad. I felt pity for her, with her being in the car when she was eleven that killed her brother, father and uncle. But I also didn't care much at all. I felt like it could have been done a lot better, could have been done so that I would have cared. Sadly I thought it was all pretty boring and nothing much happened in this book. There is another car accident. Not done well enough.

Most of this book is about how Maguire has spent her last years alone and with no friends. Then she moves school. And gets a friend on her first day, and the popular boy who crushes on her right away. Though, well, they didn't meet at school, but at therapy. So I didn't really mind that he fell for her right away. Though I didn't get it. She seemed so mean at first and she tried to push him away at all times. From beginning to the end. It annoyed me so much. Deciding the best was to stay away from him. Ugh.

But I did sort of like Jordy. He seemed like such a sweet boy. He is also pretty famous at tennis. Which was pretty cool. But not really my thing. I just didn't care much for this boy. He let his parents aka his mom decide his whole life, who to date, when to sleep. Everything. He did nothing about it for ages. It annoyed me a lot. So yeah. I didn't love the boy. I didn't love the girl. And I didn't love the friends either. Well, maybe the girls were a bit okay. But still boring. And I also really don't like boring books. Sad face.

I really don't know what to talk about when it comes to this book. Maguire thinks she has bad luck. That people around her gets hurt. Which is pretty true. But not her fault at all. I didn't care much for the therapy meetings. For her good luck charms and such. I just didn't fell for it. I felt like she didn't think about it that often. The car accident. The roller coaster thing. I just didn't think she cared all that much. And her relationship with her family was so weird and not natural. It just bothered me a whole bunch.

I don't feel like saying much more about it. I didn't enjoy the plot, because I felt like there weren't really one. Just the girl and boy trying to stop being a little bit crazy. And it was boring. And I felt like it could have been better. I sort of liked the romance, but it wasn't that good either, and I didn't swoon at any times. The ending was a bit abrupt. But I was just glad it was over, lol. But even though I didn't love it, I did enjoy it a few times. Just not really my kind of book. Though it also could have been so much better.

I did like reading this book. Sometimes. But I also wouldn't have minded not reading it. Which is depressing. But yeah. This wasn't a book for me. And I doubt I would ever read it again. I'm sure others will love it, but not me. Girl Against the Universe was not my thing. Felt like it wasn't done well enough and it wasn't exciting enough either. Big thank you to HarperTeen for the auto-approval on Edelweiss. <3 Means the most to me. I'm glad I tried it; at least I'm not curious about it anymore, lol. Did you like it?