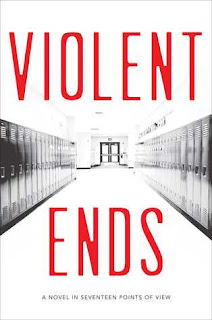 It took only twenty-two minutes for Kirby Matheson to exit his car, march onto school grounds, enter the gymnasium, and open fire, killing six and injuring five others.

But this isn't a story about the shooting itself. This isn't about recounting that one unforgettable day.

This is about Kirby and how one boy—who had friends, enjoyed reading, played saxophone in the band, and had never been in trouble before—became a monster capable of entering his school with a loaded gun and firing on his classmates.

Each chapter is told from a different victim's viewpoint, giving insight into who Kirby was and who he'd become. Some are sweet, some are dark; some are seemingly unrelated, about fights or first kisses or late-night parties.

This is a book of perspectives—with one character and one event drawing them all together—from the minds of some of YA's most recognizable names.

I'm dying for this one because one of the authors writing it is Kendare Blake. Whom I adore to pieces. Her books are amazing. It is also by so many authors, I don't know them all, but I adore a bunch of them :D So many amazing people. And this one sounds so good! It seems different. And it sounds so creepy and exciting and I like the cover too. Yeah. I think this book is going to be amazing. Can't wait to read.
What are you waiting for on this violent Wednesday?
Posted by Carina Olsen at 6:00 AM