I'm thrilled to be a part of the blog tour for The Girl at Midnight :D Was so excited when Aisha Cloud at Random House asked me to take part in it. <3 Since I had seen so many people love this book already. And I wanted to be one of them. So glad to say that I am. I liked this book so much. Sharing all my thoughts about it below :D And then an amazing US/Canada only giveaway for two hardcovers of this book, given by Aisha. <3 You should all enter that. Because this is a book you do not want to miss. Hope that you are all reading this amazing book already. If not, you really should. So go buy it. It is amazing :)

I'm so glad to say that I really liked The Girl at Midnight. When Aisha contacted me about being a part of this blog tour, and getting a copy of this stunning book, I knew I had to say yes. Because I had seen so many people love this book already. And it is beyond gorgeous looking. And it sounds so amazing. Yet I was a bit nervous too, worried I wouldn't fully like it. But I did. I even loved it. The writing is beautiful. The characters are amazing. The story is all kinds of exciting and interesting. I liked this book a lot.

I'm not even sure where to begin about this book. As I said, the writing is beautiful. I loved it. This book is mostly told from the point of view of Echo, but we also see Caius and Dorian and Ivy and some others. I loved that a lot. They were all such amazing characters. And I adored reading about each of them. Mostly I loved Caius, lol. But Echo is amazing. She's fierce. She's a thief. She wants to be accepted. And I adored her so much. I loved getting to know about her. Must know more about her past, though.

There is so much to know about this book. There are feather people. And they are amazing to read about. Though a bit too mean towards humans, aka Echo, hmph. But they are so different. And so awesome to get to know. And oh, the Ala, who took Echo in. I thought she was great. Loved getting to know her too. And Echo's best friend, Ivy. She's adorable. Well. Most of the time. She's forgiving and sweet. I wish to see more of her in the next book; I thought she was awesome. Such great characters.

There are regular humans in this book. Though we only meet Echo. There are the feather people. Then there are the dragon people. And gosh. I loved them the most. Oh, how I wish to know more about them all. More about how they look. More about how things work, like some of them having fire. Yeah. They were awesome. Especially the Dragon Prince, Caius. Swoon. I adored him. His twin sister, Tanith, not so much. She's evil. Yet so awesome to read about. I think she'll be an awesome villain in book two. Maybe.

Caius used to have a girlfriend, Rose. But that was a hundred years ago. She died. He loves her still, as you usually do once a loved one dies, and he hasn't loved anyone since, but that doesn't mean he can't fall in love with Echo. And I loved that. Rose isn't a big part of this book or romance at all. Well. That might change in book two, but I really hope not. I did like reading about Rose, though. She did seem pretty great. Well. She seemed a bit like a spy too, so I'm not sure I really liked her all that much, lol.

Then there is Dorian, whom is best friends with Caius. And ack, I loved this boy too. Well, I should mention that Caius and Dorian are both over two hundred and fifty years. But still. They look young. They act young. And I love them for it. Dorian has a crush on Caius. Which I sort of found adorable, hih. But then there is a new boy. Jasper. And reading about them flirting and arguing was so damn adorable. I liked them both a whole lot. Wish to see more about them in the sequel. Yeah. I very much want that.

Okay. I have talked a whole lot about the characters. But seriously. I liked them all so much. They are adorable. And reading about Echo and Caius getting to know each other and flirting and being so damn cute was amazing. Loved it. I won't say much about the plot. But know that it is exciting and I loved it. Loved the hunt for the firebird. The Girl at Midnight is fantastic. The characters are amazing. The story is exciting. This whole book is a special one. One that I think everyone needs to read. You go do that.

Okay. Now to talk about the romance. And the reason for why this book is a four star, and not a five star. And yes. I will be sharing spoilers about it. Because I think lots of people would want to know, myself included. I would not call this book a love triangle. But it is one. Sort of. And some parts of it really annoyed me. Echo has a boyfriend. They have known each other since age seven. They have been dating for two months now. I'm sure Rowan is supposed to be a kind, sweet boy. I didn't like him much.

But that isn't the issue. The issue is that they are together. And she does not break up with him in this book. They are still a couple. We don't see them together for many pages in this one. And she has more chemistry with Caius. She kisses Caius. And she still haven't broken things off with the boy she thinks that she loves. That hurts my heart. Just, why. She is obviously meant to be together with Caius. They are adorable. But why does she have a boyfriend? Why isn't there any time to break things off with him?

So yes. That was my only issue with this book. And I'm still unsure if I think it was a love triangle. It isn't really. Because her boyfriend isn't there with them. And Echo has done something awful in front of him, and she's sure he hates her because of it, so she's kissing Caius, because they have such amazing chemistry. Which I loved. But she still has a boyfriend. Seriously. This issue better be done with very early in book two. Pretty please. Please don't make it into a real love triangle. I couldn't stand that.

Anyway. That was my issue. It didn't bother me all that much, but it still annoyed me some and hurt my heart. But besides that. Besides that this book was a five star for me. Because everything else was amazing. But that ending. Ugh, that ending is evil. And I loved it. I must know what happens next. Echo now has other memories inside her head. But I wouldn't say that matters much, as she is still Echo. And Caius fell in love with Echo. And I fell in love with Echo. And yeah. Echo is such an amazing person. <3

I think that is all I could say about The Girl at Midnight right now. I loved it a lot. Only that one issue, which I really wish hadn't been in the book, but it was such a small thing. And only one thing. The rest of the book I liked so much. I adored the characters. The different characters. Sure, this book reminded me sometimes about other books, but I didn't mind at all. This one was awesome. Thank you so much Aisha for sending me this precious hardcover. <3 I loved this book so much. And I'm so glad I read it. 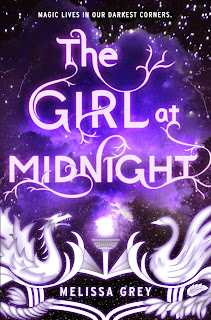 Beneath the streets of New York City live the Avicen, an ancient race of people with feathers for hair and magic running through their veins. Age-old enchantments keep them hidden from humans. All but one. Echo is a runaway pickpocket who survives by selling stolen treasures on the black market, and the Avicen are the only family she's ever known.

Echo is clever and daring, and at times she can be brash, but above all else she's fiercely loyal. So when a centuries-old war crests on the borders of her home, she decides it's time to act.

Legend has it that there is a way to end the conflict once and for all: find the Firebird, a mythical entity believed to possess power the likes of which the world has never seen. It will be no easy task, though if life as a thief has taught Echo anything, it's how to hunt down what she wants . . . and how to take it.

But some jobs aren't as straightforward as they seem. And this one might just set the world on fire. 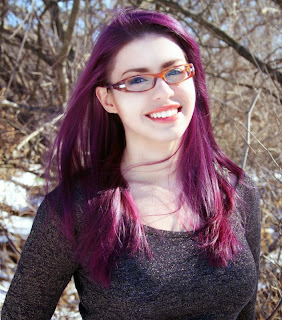 Melissa Grey penned her first short story at the age of twelve and hasn't stopped writing since. As an undergrad at Yale, she learned how ride a horse and shoot a bow and arrow at the same time, but hasn't had much use for that skill since graduating in 2008.

Her debut novel, THE GIRL AT MIDNIGHT, will be published by Delacorte/Random House in spring 2015.

Giveaway Rules.
There will be 2 winners.
It's open to US/Canada only.
Books will be shipped from publisher.
Must respond to my email within 48 hours.