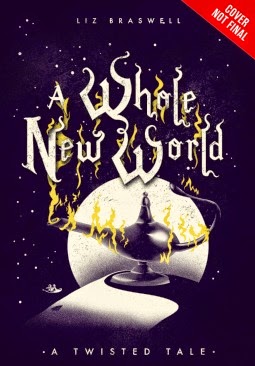 When I saw this book on Netgalley, I had to request it. So pleased that Disney Press accepted my request a few days ago. Had to read it right away; as I thought A Whole New World sounded all kinds of amazing. Now that I have read it, though, I'm a little bit disappointed. Yet I still liked it a lot.

The cover isn't final yet, but I'm really hoping it will look a lot like that teaser. Because damn. That is a gorgeous cover :) Love the font, so pretty. But oh, I'm not sure how to talk about this book. Because I did not love it. But I also did not hate it. I liked it, yet had some issues. Going with a three star for this.

At first I found the story to be pretty interesting, though the first seventy pages were a little bit boring, as it was a complete retelling of the beginning of Aladdin, until he got trapped in the cave, this time without the lamp with him. Which is when the story finally started to get much more exciting. The beginning was still a bit different, though, and I loved getting to know about Aladdin's mother when he was a child, whom later died. I liked reading about his first meeting with Jasmine. I did like how they liked each other right away, but I also found it to be a bit of insta-love, and I'm not sure I really liked that very much. Sigh. But the book did get better. Just wishing it had been perfect. But this was still a good book.

I did sort of like the writing in this. I did not hate it, but I didn't fully love it either. Some things bothered me. Yet the writing was still pretty good. One thing that did bother me, however, was that a lot of this book felt childish to me. And I didn't understand why. This is young adult, the characters are almost twenty, I think, and some pretty horrible things do happen. Many deaths. Yet some things were so childish and most things were toned down. I didn't like that much. I wish some things had been more.

Though I did mostly like this book a lot, I had some issues. Most started after I had read half the book. I found out that I didn't like the romance. I wanted to love it, but it isn't fully there. There are a few small kisses between Aladdin and Jasmine. And just suddenly they are talking about loving each other. I didn't support it, because we did not get to see them fall in love. Which I did not like. As there were time jumps in this book, a whole month. Just. The romance could have been a whole lot better than it was.

A Whole New World is a twisted version of Aladdin. With Jafar getting the lamp, and using two wishes, to become Sultan and become a sorcerer. And I just. I found some things to be really exciting. But I also found things to be just silly and boring. It could have been done a lot darker and much more interesting. Which is why I'm disappointed. Yet I'm still giving it three stars.. as I'm conflicted. As I did enjoy reading this book. And I did want to know what would happen next. And I liked the ending too. Probably. Mostly.

There are many things that are the same as the disney movie version of Aladdin. And I liked that. Though I don't fully love that movie either, sigh. But some things are different too. Awful things happen to the magic carpet. Many people die. And other horrible things happen. Yet I didn't find it that exciting, as I felt like it could have been a whole lot darker and written better. I didn't fully connect, as the point of views are a bit weird, yet I still liked Aladdin and Jasmine. And others. Just didn't love any of them.

So many characters in this book. So many Street Rats. And I did like reading about them. I just. I felt like it was a bit silly, after Jasmine ran away from Jafar, and started leading the Street Rats. I found it a bit weird, the things they did and such. And how they all talked. Sigh. But at the same time I did like the beginning of the book a lot. And I was interested in it all the time. But I was still disappointed. I felt like this book could have been a lot better. Hmph. I want darker books, lol. Though it was a little bit dark :)

A Whole New World is a different book. It's a great retelling, though not perfect. Some things were really horrible, yet not horrible enough for me. But I really wish people will read this book. Because I want to know all the different opinions. Also, no love triangle at all in this book. So that's a plus. Just, too little romance. Ugh. I didn't say too much about this book, because not that much happens, but the plot is good. Not perfect, but good. Thank you Disney Press for letting me read this book via Netgalley. <3