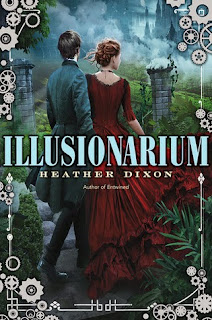 When I heard about this book, I was dying to read it. Because that cover is beyond beautiful. And the summary seemed so exciting. Plus, I had loved her first book years ago. But then. I heard that people didn't love this book. So I got nervous. Yet still wanted to read it. So now I tried. And I regret it so much.

How to even begin talking about this book. Well. I shall start with my rating. I'm giving this book one star. In the beginning, I thought it might be a three star. Then a bit later I thought to give it a two star. But now having read all of this book, I'm not giving it higher than a one star. This was just not good at all.

I don't like writing negative reviews. Well. Okay. I might love sharing what I don't like about a book. But I don't like having hated a book. I wish to love all the books that I read. But this one. I didn't love a single thing about it. And I just. I have a lot of thoughts about it. All negative. And some spoilers might happen too. Don't care. Just writing what I feel like about this book. Sigh. First I want to say that this cover is beyond beautiful. And I love my print ARC, since it is so pretty. Just wishing the inside had been pretty too. Ugh. I'm also getting the hardcover.. regretting that a bit now. But well. At least the book will look all kinds of gorgeous. That's a plus, I suppose. But yeah. Pretty cover lied to me. Which makes me so sad.

But this beautiful cover. It is a lie. It promise a great romance, or at least a great story with a boy and a girl. But it isn't. There is zero romance in this book. There isn't a girl friend either. There is just.. so much silly. And oh god. I hated this book. Well. Maybe I didn't fully hate it. I'm not sure. But I did not like it one bit. And I'm giving it one star. So yeah. Maybe I did hate it. I wanted to DNF it all the time. Yet I don't really DNF books, so I decided to finish it. Thankfully finishing it happened pretty fast. Sort of.

Illusionarium is told from the point of view of sixteen year old Jonathan. I thought I would love him, like I love all the boys I read about in books. But I didn't. I didn't like this boy at all. He is so damn silly. He talks weird. He thinks weird. He was just.. not a good character to read about. His family was weird too. Ugh. And his sister, whom is 14. She was described as really beautiful. And she has a best friend, Alice. I suppose she is the same age. Boy has a crush on her. I found it a bit disgusting. Not sure why.

Which, yeah. I should mention that the writing in this book is goddamn awful. It bothered me all the time. Which makes me so sad. As I read her other book, Entwined, three years ago, and I loved it so much. Makes me wonder if I would hate it if I re-read it now. I don't think so.. but yeah. It sucks that this book was so bad. But it was. The writing was awful. So childish and silly. And not in a good way at all. So much about it bothered me. How the characters were acting. How they talked. Just, everything.

Then there are all the characters in this book. I cannot. I couldn't stand any of them. I hated Jonathan. For the most part. His sister, Hannah, seemed like a good person. Probably. But we see her for only a few pages. Then there is the guard boy, Lockwood. Whom is always hitting and beating up Jonathan. Which was supposed to be funny, it seemed like. But I didn't get it at all. It was written so damn badly. It annoyed me so much. I couldn't stand that boy at all. Ugh. And the Queen. Written so badly. Sad face.

Then there was the girl, Anna. I didn't like her either. Something happened to her, and Jonathan is thinking this. "My soul screamed her name." What the actual fuck. Seriously. He keeps thinking about his soul and blah blah blah. I hated it. And other characters too. I couldn't stand any of them. Not bothering to mention any of them either. They were all written so badly and I didn't feel a single thing for any of them. Which I'm not used to while reading. Meaning it sucked so much. I'm sad about it.

Then there is that plot. Alternative London. Which could have been pretty interesting. I liked the North, where the boy lived. But not enough time spent there at all. Suddenly there is another London. Another universe. I loved that in other books. In this one? Not at all. It didn't work. It was written so bad. And in this other London. He gets taken prisoner. He doesn't try to get away. He just goes along with whatever this damn woman is saying. And she didn't seem real at all. She was such a badly written villain. Ugh.

Anyway. Back to the plot. This other London is falling apart. Because the people are inhaling a drug. A drug that makes them grow another nose. Eye. Fingers. Toes. Everything. It was so fucked up. Not in a good way. It was just. As if things weren't written badly enough in this book. It went from bad to worse all the time. I just can't stand how much I did not like this book. And now I'm tired of talking about it. The characters were bad. The plot was awful. The writing was horrible. This book was not worth it.

To say my final words. Do not read Illusionarium. It is one of the worst books I have read. It is not worth reading at all. So yes. I would suggest you do not read it. Sigh. But then. I have seen some people love this book. And I do not understand it one bit. Sigh. But reading different opinions is pretty fun, even so. But yeah. I would not read this book again. Never again. Sigh. But anyway. Huge huge huge thank you to HarperCollins International for sending me this very previous print ARC. <3 You guys are the bestest.