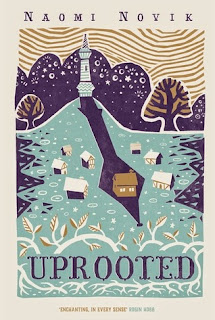 I don't know where to begin with this book. I did not like it. I wanted to, so badly. But two stars for me. Ugh. But oh, it is gorgeous. And I'm forever thankful to Mel for hosting the amazing giveaway that I won. <3 Thank you sweet girl. My hardcover is precious, despite me not loving the inside of it :)

I'm not sure how to describe this book at all, though. I have heard so many say they loved it. And I wanted to love it too. Because it sounded amazing. And it looks so gorgeous. But goddamn it. This book annoyed me greatly. And I have so many thoughts about it. Ugh. Shall try to explain all of them. Sniffs.

At first I thought I would like this book a whole lot. It seemed interesting. But then I got bored. And it took me three days to read this book. Which is not a good thing. I wanted to DNF it so many times, but I decided not to, because I'm not really one to DNF that often. Hmph. I regret not doing so. Well, I'm not saying that this book was bad. It wasn't awful. I didn't hate it. I truly didn't. But I did not like it either. I was so bored. This book is so goddamn long. And hard to read. And I never seemed close to finishing it. Plus, the writing is awful. Goddamn awful. The girl is telling a story, it seems like. Not much talking at all. She isn't even good at telling this story. And it bothered me so much. I just felt nothing for this book. Nothing at all.

Well, okay, I'm giving this a two star. Which means I liked some parts. Like how I thought it was good in the beginning, before I got bored. How I liked that one smut scene. Which then was ruined for me a second later. Ugh. I found some scenes to be all kinds of exciting, and I wanted to know what would happen next. But then it went back to being boring and long and never ending and ugh. I couldn't with this book. I wish I had loved it. But I don't see how I ever could. Which is making me oh so depressed.

I might also be holding a grudge against this book. My feelings about it might be silly, but near the beginning. The girl is almost raped. By a prince. He suddenly kiss her, and she's thinking that if he had asked her instead, she would have slept with him. What the hell. She didn't know this prince. Had never met him before. I did not like this girl. Ugh. She wasn't raped. But she did not want it anymore when he tried to rip her clothes off. So yeah. That scene was disturbing. And it annoyed me so goddamn much.

I just don't know how to talk about this one. The book is told from the point of view of seventeen year old Agnieszka. Whom has the weirdest name. It isn't used often. As this is just her thinking and telling and ugh it bothered me. Anyway. Main girl. I didn't like her much. She gets chosen by the Dragon. To live with him for ten years in his tower. First I was all, yay! But it was so silly. I didn't like this plot line at all. I wanted to. Also, the Dragon seemed like an interesting man. But not that interesting at all. Not really.

And Agnieszka is sort of acting like an idiot a lot of times. I didn't find her strong or brave or scared or amazing or anything. I just felt nothing for her. Not a good sign. And then, of course, she turned out to be a witch. And could do magic. I didn't get it. Not at all. She struggles a lot with it. She can only do a few things. And then suddenly she can turn mud into an animal? What the hell? I must have missed something. Yet I didn't. The magic in this one was weird. I wanted to love it a lot. But I didn't at all.

Another moment that I hated with a passion: girl passed out from doing too much magic. Was told by a healer she couldn't do any more magic for a week; that her body was all out of it. Yet the very same day she's walking through walls. She's making mud into animals. FOR DAYS. What the actual fuck. This book made no sense at all. And how the hell did she know how to do all of those spells? I didn't understand it at all. This book sucked at explaining things. Because it didn't really explain anything at all. Frustrating.

Now what to say about this book.. I don't know. The plot was weird. I was curious about the Wood, but even that was turned silly. Especially the last fifty pages. Gosh, they were awful. I'm pretty sure I read most of it not paying attention at all. It was so bad and boring and I did not like it. Sad face. Characters were pretty awful too. I sort of liked her best friend. Probably. For a short moment. The royal family were stupid. Too much time spent there doing nothing. Too much time spent doing nothing all over.

Then I should mention the romance. The girl and the Dragon spend a lot of time fighting in the beginning. Over things that made no sense to me. Ugh. Then just suddenly they seem to be in love. Their first and almost only kiss almost ends up with them naked. A bit weird. Came out of nowhere. And then the smut part, later on. I liked that a little, not in a lot of YA books. But then the girl ruined the moment for me the very next page, by thinking about silly things. I just. I didn't care for the romance.

I'm not sure what else to say. I could talk for ages about the things I didn't like about this one. But I don't want to. I just did not like it. It wasn't worth it to me. And that is oh so depressing. I'm sorry for not liking this book at all. But yeah. I wouldn't recommend it. Some will love it, sure, but I did not. And also, the epilogue sort of thing at the end. Gosh damn it was silly. I wouldn't say it ended good either. Not in my eyes. It was annoying to me. And silly. And yeah. I regret spending so much time with this book.

Goodreads - The Book Depository - Amazon
Posted by Carina Olsen at 12:14 AM