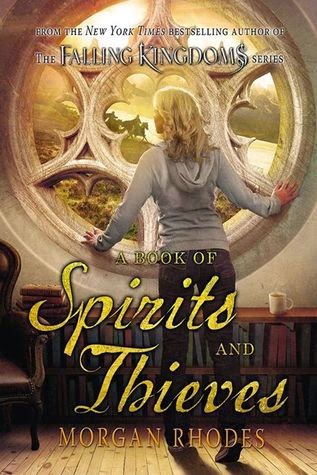 A BOOK OF SPIRITS AND THIEVES BY MORGAN RHODES

New York Times bestselling author Morgan Rhodes takes readers into exhilarating new high-fantasy territory with A BOOK OF SPIRITS AND THIEVES. Written in alternating perspectives that shift between modern-day Toronto and the ancient kingdoms of Mytica, Rhodes masterfully weaves the dark, magical world of her Falling Kingdoms series into an epic contemporary saga that will leave you breathless.

Modern-day Toronto: A heavy leather-bound book written in an unrecognizable language is delivered to the Speckled Muse, the antique bookshop owned by Crystal and Becca Hatcher’s mother. When Becca opens it, she’s sent into a coma, leaving Crys behind to uncover a series of terrifying secrets.

Ancient Mytica: A merciless goddess hunts for the elusive treasure that will make her ruler not only of Mytica, but of all the unseen worlds that lay beyond it.

Modern-day Toronto: Rich and aimless Farrell Grayson finally has the chance to prove himself when the mysterious leader of a powerful secret society invites him into his fold.

Ancient Mytica: Maddox Corso has always been different, but never remarkable. Everything changes the day he meets a pretty, unfamiliar girl from a faraway land, only to realize that he’s the only one who can see her.

Fate has brought these young people together, but ancient magic threatens to rip them apart.

I adore this author. Morgan is pretty much amazing :) And I think this book sounds all kinds of exciting. I adore fantasy books. And this sounds so different. And exciting. And also a whole lot of confusing. So many characters. Yet I'm pretty sure I will love it to pieces. I hope so. And hoping for some epic romance too, hih. <3 I just think it sounds amazing. And I cannot wait to read this book as soon as possible :)
What are you waiting for on this historical Wednesday?
Posted by Carina Olsen at 6:00 AM