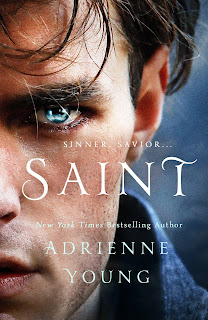 New York Times bestselling author Adrienne Young returns to the world of The Narrows with Saint, a captivating prequel to Fable and Namesake.

As a boy, Elias learned the hard way what happens when you don’t heed the old tales.

Nine years after his lack of superstition got his father killed, he’s grown into a young man of piety, with a deep reverence for the hallowed sea and her fickle favor. As stories of the fisherman’s son who has managed to escape the most deadly of storms spreads from port to port, his devotion to the myths and creeds has given him the reputation of the luckiest bastard to sail the Narrows.

Now, he’s mere days away from getting everything his father ever dreamed for him: a ship of his own, a crew, and a license that names him as one of the first Narrows-born traders. But when a young dredger from the Unnamed Sea with more than one secret crosses his path, Elias’ faith will be tested like never before. The greater the pull he feels toward her, the farther he drifts from the things he’s spent the last three years working for.

He is dangerously close to repeating his mistakes and he’s seen first hand how vicious the jealous sea can be. If he’s going to survive her retribution, he will have to decide which he wants more, the love of the girl who could change their shifting world, or the sacred beliefs that earned him the name that he’s known for―Saint.
Hardcover, 320 pages
Expected publication: November 29th 2022 by Wednesday Books
Pre-Order: Book Depository and Amazon #ad
I'm so behind on books by Adrienne. Oops. One day soon I shall have to catch up and read the three I have that are already out. <3 But yess. I am still excited about this and will be ordering it, even so :D Ha.
What are you waiting for on this saintly Wednesday?
Posted by Carina Olsen at 6:00 AM