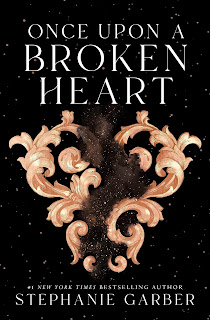 ONCE UPON A BROKEN HEART BY STEPHANIE GARBER

From the #1 New York Times bestselling author of Caraval, the first book in a new series about love, curses, and the lengths that people will go to for happily ever after.

Evangeline Fox was raised in her beloved father’s curiosity shop, where she grew up on legends about immortals, like the tragic Prince of Hearts. She knows his powers are mythic, his kiss is worth dying for, and that bargains with him rarely end well.

But when Evangeline learns that the love of her life is about to marry another, she becomes desperate enough to offer the Prince of Hearts whatever he wants in exchange for his help to stop the wedding. The prince only asks for three kisses. But after Evangeline’s first promised kiss, she learns that the Prince of Hearts wants far more from her than she’s pledged. And he has plans for Evangeline that will either end in the greatest happily ever after, or the most exquisite tragedy…

I had not looked into this book until I saw the gorgeous pink cover on B&N. And then I simply had to pre-order it, haha :D And I think it sounds pretty awesome too. And I very much hope that I will love this one.
What are you waiting for on this broken Wednesday?
Posted by Carina Olsen at 6:00 AM