Review: Such a Quiet Place by Megan Miranda 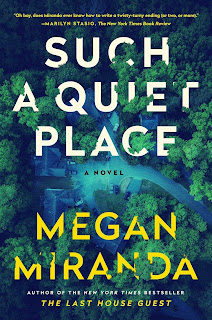 Of course I would be read this newest book by Megan Miranda. Have read and loved all her books, just one unread. So when I got approved to read it from the publisher via Edelweiss, I was beyond happy. As I have loved all books I have read by her so far. Felt sure I would adore this too. That was sadly not the case.

What even. I'm still struggling to understand it, to be honest. I'm going with a two star rating for this book. I wanted badly to love it. But I did not. Had trouble reading it from beginning to end. I have always loved Megan's writing, but with this book I did not. Which disappointed me a little. Will share most of my thoughts.

I do have a bunch of thoughts about this book. And yet I fear I will run out of words, not knowing what to say. Will try my best to not share spoilers. And not write too much, but knowing me I still will. Oops. I was expecting this book to be a full thriller. That it would be exciting, that there would be murders. But oh, it really wasn't. Nothing happened for at least over half the book. And it was fully boring to me. And I had such trouble reading through that first half of the book. Because I did not at all care about the main character, thirty year old Harper. I did not really like her at all, to be honest. She was boring. She was sort of a pushover too, and not in a good way. I felt like she didn't really change much either. I tried my hardest to like her. But I just did not.

This book is about Harper, where she lives, and her roommate that comes back from jail. She lives in a small neighborhood. With the houses close together, everyone knowing each other. They have their own online chatting place, just for those who own houses. They all spend their summers at the pool close by. They are all close. And so when two people end up dead next door they all come together, trying to figure out who killed them. Which ends up with Ruby, Harper's roommate, in jail. Claiming that she is innocent.

Harper got rid of all her things, after Ruby's dad told her to. She never once visited her either. She was supposed to be in jail for twenty years. But then, fourteen months after she was put away, she shows up at Harper's door. Free. As there was no real evidence that she had killed them. And now she's putting herself into Harper's life again. And Harper is too scared to say otherwise. She is unsure if Ruby is guilty or not. If not, there is a murdered among them, still free. I just. Sigh. I did not like Ruby. Not at all, sadly.

And now I do not know how much else to say about this book. I thought it would be full of suspense. It was not. I thought it would be a murder mystery. It wasn't really. It was more about getting to know the neighbors a little, getting to know Harper more. And I did not care one bit, to be honest. They were not good people. None of them. And Ruby might have actually been the best of them all, I think. I just felt like there was too little happening in this book. Too little murder, too little mystery. Wanted more of everything.

One thing I had an issue with in this book was the romance. Well, there wasn't any. It is mentioned that Harper moved to Hollow's Edge with her boyfriend, who turned into her fiancé. After he finished school, he just left her and moved away. And so she got a new roommate, Ruby. Then she ended up in jail. And a little after Harper slept with her boyfriend. And they had a small on and off relationship. And I did not like it at all. He was older, and he seemed kind of toxic, to be honest. Thankfully, she ended it with him.

I somewhat liked the twisty ending. One twist long before the ending, and that one I did not like at all. It had not needed to happen, and I did not approve of it. Sigh. And then the ending. I didn't see it coming, but that did not mean that I liked it either, sadly. I wish I could have loved this book. But I didn't. I tried so hard. But I simply did not care. About the characters, the murder, the setting. It was too boring to me. Sort of interesting at times, but not enough. I liked the twist, but it was too little murder, way too little suspense.

Despite not loving Such a Quiet Place like I had excepted to, I am still glad that I read it, of course. And I will still be buying the hardcover to add to my Megan collection. It looks gorgeous. I will still, of course, read whatever she writes next. I just had some bad luck with this latest book of hers. It's the only one of her books I have not liked. Still the biggest fan of her, just not of this book. But you all need to read it too. Curious to know what you all think. Big thank you to the publisher at Edelweiss for letting me read it early.