Review: You Were Never Here by Kathleen Peacock 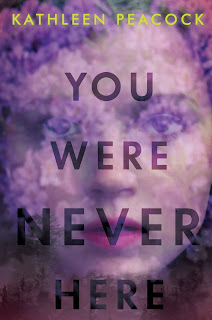 This book was all kinds of thrilling and I am so glad that I read it. I mean, I knew that I would, as I have been a fan of Kathleen for years now. And this new book by her sounded amazing. Happy to say that it very much was so. Giving this four stars, as I loved pretty much all of it. A few small issues, nothing big. I adored it.

Will begin by saying that the writing was perfection. No trouble at all connecting to the characters and story. Which was the best. I adored reading about all of the characters. So much. The setting was great; I liked this town. A small part of supernatural, family powers. It was so good. Really liked all of the twists. Well written.

I loved the main girl, Cat, the very most. The whole book is from her point of view, which was awesome. Getting to know this girl was simply the best. Most important, she was fat. Like me. And I very rarely get to read books where the main character has been fat. I can only recall one book right now. Which is disappointing. As reading about Cat was so very amazing. I loved that she was chubby. I loved how awesome she was. I loved how her being fat was mentioned in this book. How it was not a big deal. Simply put, this book was written so well. And Cat was the very best. And I am so glad that Kathleen wrote her as bigger than most characters in books. I so need to read more books with chubby girls. I know there must be more like this one; which was so good.

But that was not what this book was about. We get to meet Cat just as she is crossing the border into Canada. She's leaving her home to spend the summer with her aunt Jet. As her dad kicked her out and took her phone and laptop away, for reasons we do not learn until later. I did not like her dad. At all. He was okay at times, but yeah. Not a good dad. I disliked Jet at times too. Oops. But she turned out to be pretty much awesome and I grew to love her too. Cat has not been to visit her aunt since she was twelve.

Back when she learned something about herself and when she lost her best friend. One of the things that I loved about Cat was the secret about what she could do. How she could touch someone and see things. It was so awesome and I loved it most. I wish she didn't feel like she could never touch anyone. How she had been so alone and without touch for so many years. It was sad, but understandable too. I completely adored Cat. She had some faults, but I loved all of them. She was so cute and adorable and fully fierce.

We learn so much about her in this book. We learn about her past, what happened before this summer. And what happened those five years ago. We learned about her and Riley, her best friend for the summer she was twelve. She and him were amazing together. It broke my heart to read about how they stopped being friends. They were both at fault, but gosh, how I wish Cat had done something about it. Ahh. They were so good together back then. Sigh. But yeah. I loved reading about her past. Most about her present.

Cat makes some new friends when she arrives at her aunt's place. First the boy renting a room in the big house. Aidan. I will confess that I did not like him. Oops. He was fully handsome and flirted with her all the time. Which she wanted. And yet I did not like him. Most likely because we got to know the boy next door too, Noah. Riley's older brother. Riley had been missing for three months. Noah would do anything to find out what happened to him, to find him. Noah was dark and mysterious. And I loved him right away.

I would not call this book a love triangle. Sure, there are two boys. But romance was not a focus of this book. There was no drama. I had no bad feelings in my stomach. Okay, maybe this was because I never liked Aidan, haha. I wanted Cat with Noah. She is attracted to Aidan. But it feels like she has feelings for Noah. And though this book had almost no romance, for reasons, I shipped them so very much. Reading about Cat becoming friends with both of them were so great, though. I loved that she slowly opened up.

There was also Skylar. Whom was all kinds of adorable. I loved that girl. And her growing friendship with Cat was simply the best. And Joey and Chase too. They were great new friends. Well, I hated something Joey said. Very much. Hmph. But the others were great, haha. I just loved getting to know them. I loved getting to know Cat and growing to love her. I loved shipping Cat and Noah more and more. Okay, I wish there had been more romance. Sigh. But this book was still almost perfect and I enjoyed it so very much.

This book was about Cat trying to figure out what happened to Riley. Where he went. Did he choose to go, was he taken. A girl ends up in the river, almost dead. She does not remember what happened to her. But Cat is shaken. And want even more to know what happened to Riley, her once best friend. There was mystery in this book. Liked that very much. The final reveal was pretty great. I did somewhat wish there had been more death, ha. But I still liked this plot so much. And the town it was set in was awesome too.

Yoou Were Never Here was just as amazing as I expected it to be. Thrilling and exciting. Most amazing chubby main girl. A great mystery. I was worried about the romance, but I had no reason to. I only wish there had been more. Four stars, as I wish there had been a little more scary parts. And more romance. And because I felt like there were a lot of moments where nothing happened. Oops. But I did not mind at all. Such a great book. Thank you HarperTeen for letting me read this early via Edelweiss. So glad I did.