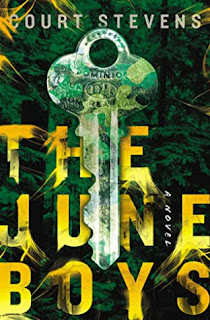 I have been meaning to pick up this book for weeks. But I have not read anything for ages. Until yesterday. And I am so glad that I finally read this book. Although it sadly was not all that I wanted it to be. But I still enjoyed a lot of it. Giving it two stars, though, as I had some issues. The mystery of this book was mostly exciting.

But my issues was still a few too many. Mostly I had problems with the writing. I did not like it. I was not able to connect fully to the characters or the story. I simply did not care enough. I just wanted this book to be so creepy and exciting. It was somewhat creepy, but not nearly enough. The ending was best of all of this.

What I really liked about this book was the story. How one person had been kidnapping boys for the past ten years. All boys and all under age eighteen. And always happening on June 1st. It's what made me interested in this book. I wanted to read a fully creepy kidnapping story with great characters and a very horrible villain. Sadly, this was not really what I got. This book focused more on Thea and her life. Which was actually kind of boring and I never grew to really like her. Which was depressing. Her cousin was taken almost a year ago. Thea has been investigating the Gemini Thief ever since. But no one has ever found this person, and the missing boys have always been returned one year later. Until now, when one of the boys show up dead next to a road.

Which is what starts Thea into thinking that her father might be the criminal here. There were clues that lead to him being the one taking the boys. But she does not want this to be true, despite believing that it is. And so this book was mostly about her trying to find her missing cousin and finding out who took him. It was kind of a mess, to be honest. Everyone close to her ended up being a suspect in her eyes. It was such a mess, as they all could have done it. The evidence was messy too and I just wanted it to be better.

Because this whole investigation thing bothered me. Thea doesn't seem to see obvious things. And she suspected everyone. The clues about the real thief were not done very well. As this book felt like it was all over the place. When we finally found out who was the thief, it seemed a little silly. The person behind it has some weird reasons; Thea finding out was weird too. I liked the ending, but I wish it had been better and more creepy. I did not really like knowing the thief at all, because the thief was too boring in my eyes.

Thea had a boyfriend. Nick, three years older than her. They met the day after her cousin went missing, so they have been dating for almost a year. I wish I could say that there was a sweet and good romance in this book. But it wasn't. It was barely there. And they did not seem close at all, despite the fact that they were supposed to be so in love. It was weird. I liked Nick, I did like them together, but there was no love there. There was no passion, no romance. Which made me even more sad, haha. I simply wanted more.

More of everything, honestly. It should have been more creepy. The romance should have been better. The writing definitely should have been better. So many weird words in weird places. It was impossible to connect. Sigh. Thea had a few friends. They were interesting, but easy to forget. I didn't feel anything for any of these people. I wanted to, but it wasn't written well enough for me. Others might love this, though. But I wanted more. But there was one thing that I sort of liked a whole bunch. Issues with it too, but still.

The book is told from the point of view of Thea. But this is also told through letters written by her captive cousin. And I liked getting to know this boy. Some of these letters were just weird and silly, but near the ending it got really interesting and exciting too. Heartbreaking at one point, but even that could have been much more than it was. Sigh. It was interesting to read about the captive boys. It was so depressing that they were captive, how it changed them. But I wanted it to be darker. Much darker. I'm a bit disappointed.

But anyway. Despite not loving it, I did find The June Boys to be a good read. I was interested in knowing how it all ended, despite not caring for any of the characters. Only wish it had been more dark and written better and that it had more heart. There was also a little bit too much religion mentioned. I don't believe in any of that, so it was a little weird to read about someone saying God spoke to them. Yeah. But I am sure others will enjoy this book a whole lot. It simply was not really a book for me. I am glad I read this, though.