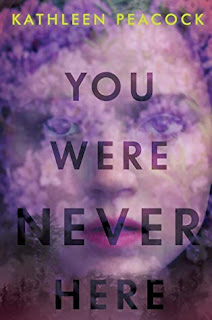 YOU WERE NEVER HERE BY KATHLEEN PEACOCK

Cat hasn’t been to Montgomery Falls, the town her family founded, since she was twelve years old. Since the summer she discovered she could do things that no normal twelve-year-old could do. Since she had her first kiss with Riley Fraser. Since she destroyed their friendship.

Now, five years later, she’s back and Riley has disappeared.

For the last three months no one has heard from or seen Riley. And while there are all sorts of conspiracy theories about where he went, neither the police nor his parents are any closer to finding him. When Noah, Riley’s brother, asks for help in discovering what happened, Cat is torn between wanting to learn the truth and protecting the secret that she’s been guarding ever since that summer she and Riley stopped speaking.

But then a girl is discovered floating in the river, barely alive with no knowledge of who attacked her or why. With the possibility that someone out there is hunting teens, Cat must make a choice: Use her unusual ability to discover the truth and find Riley or keep running away from a power she can’t control. Only one choice will put her in a killer’s sights…

Eee! I am SO excited for this book :D Have adored Kathleen for years now and have been waiting for a new book by her for so long, haha. And this one sounds all kinds of creepy and wonderful. Sigh. I just know that I will love this book. And I cannot wait to read it. Also, romance? I hope so :D So so excited.
What are you waiting for on this hunted Wednesday?
Posted by Carina Olsen at 6:00 AM