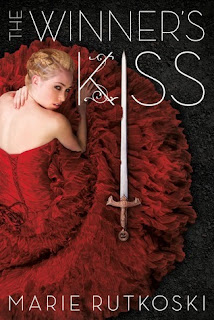 The writing was stunning, of course. This story was even more exciting than the previous books. The characters more precious than ever. And the romance was full focus and beyond adorable. This book brought me so much joy. Sure, some pain, but the joy meant too much for me to even notice most of the painful parts.

There is much I could share about this book. But my mind feels empty of words. My heart is too full of love for this most perfect book. Sigh. I can't believe that I had forgotten so much of it. But then, it has been four years since I first read it, and this being my second read. I will not let it go this many years again before I re-read this trilogy. It is worth all the pain. Because this ending was truly worth it. I have to admit that the first parts of the book were my favorite. It was the parts that hurt the most, of course, but the feelings that Arin had about it made me so happy. Okay, it was heartbreaking to read about how sad he was, all the regret he felt. But I was so so glad to see it. I was happy that he felt regret and anger at himself. It simply made me love him even more.

This third book takes place after Kestrel has been sent to prison for treason. After her own father turned her in. Arin and his people are at war against the Empire. He does not know what Kestrel did for him. He does not know that she went to prison for him. He only remembers her lies, that Kestrel did not want him. When that was so wrong, that she wanted him most, and did everything for him. It was so beyond sad to read about the beginning of this book, how Arin tried to forget her. How Kestrel tried and failed to escape.

But then came the pages were Arin learned that Kestrel had been the Moth. That she had been captured and taken to the most horrible prison there was. He went to find her. But it had been a whole month. She had been there so long. Getting drugs every morning and night. She had forgotten herself. Had forgotten Arin. And this is what I loved most. How Arin tried his best to care for her. How much regret Arin felt, how sad and angry he was. It was the best. Then there was Kestrel. Gosh. I loved this girl more than anything.

She spends most of this book not remembering most of her life. Not knowing herself or Arin or her father. We get to see her remember some parts. How it breaks her. We get to see Arin try his best to take care of her. We get to see her slowly getting to know him again, as well as herself. It was so sad to read about at times, but my gosh, how thrilling and good it was too. Arin and Kestrel are together, well, somewhat. At least they are not apart any more. They get to know each other. And it was the very very best thing. Eee.

It might be mean of me, but gosh, how I loved how broken they both were. Arin and how he felt he could never be loved. Kestrel and how she felt she would never know herself again, unsure if she loved Arin or not. They were both broken so badly. And they fit together so well. Their romance did take some time to happen, but that time was not spent badly. And when they finally got together it was everything. I loved them so much. Sigh. I just loved the romance in this book the very most, haha. It was the most precious.

But this book was not all about the romance. There was more of Sarsine, whom I adored so much. There was more of Roshar, whom I also loved the most. His sister, the Queen, not so much. Hmph. But Roshar was the best. And his friendship with Arin was so good and special. There was the war. A whole lot of it. Many died. But it was also so interesting to read about and written so well too. Then there was Kestrel's father. I loved him, once. I hated him in this one. But also thought his ending was good. Curious for more.