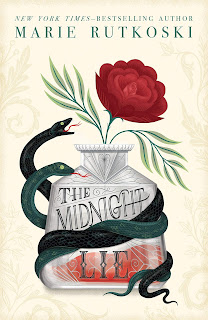 I have been excited about this book ever since it was announced. The original trilogy was the very best and I have loved re-reading the books so very much. Learning that this book would be set in the same world, not far after, was the best thing. And of course to finally get a new story by Marie. Her writing is beyond incredible.

And so I was thrilled about finally reading this book. And I am so happy to say that I did love it. I adored the characters. The kind of new world was so exciting to get to know too. The writing was so gorgeous. And the romance was truly good and precious. I had a few very small issues, which is why this one is a four star for me.

But this does not mean that I did not love this. Because I did. And very much so. Will share my issues, but first share all the reasons for why I adored this book so. It takes place around twenty years after the end of The Winner's Kiss. But it takes place on a whole new island. Getting to know this place was every kind of exciting and interesting. As it was so different from where Arin and Kestrel came from. This is told from the point of view of nineteen year old Nirrim. A girl whom I adored beyond words. She was loving and kind and brave. But also too trusting and unable to see certain things clearly. Which made my heart hurt. But gosh, I adored her so much. She has a gift of memory. Nirrim cannot forget anything. She remembers being born. She remembers every detail.

Getting to know Nirrim was the best. But also the worst, because of the life she had. My heart hurt for her. But despite not having much, she was still okay with what she did have. A few friends. Someone that she looked at as her mother. A home. But it was not as simple as that. On Nirrim's island all the people were divided into three. The half kith, the middling, the high kith. Nirrim was a half kith, living in the poor part of city. Never allowed to leave her place, having to live by a whole lot of rules and punishments for breaking.

I very much liked reading about how this city was. It was so evil and cruel and so interesting to read about at the same time. I loved getting to read from Nirrim's point of view. This book begins with Nirrim finding a lost bird, and returning it to the milita. Who ends up arresting her. She is sentenced to a month of jail and tithed with having her blood drawn once each day for that month. Which was a way too harsh sentence, when she had done nothing wrong. Well, except that she killed a man, but no one knew that. Only Nirrim.

There is so much going on in this book. Learning about the half kith, how poor they were and all the rules they had to live by. They couldn't wear colors. They couldn't eat sweet things. They were encouraged to make more children. They were attacked at times, their children taken from them. It was not a life worth living. Which was fully heartbreaking to read about. The middling could visit the poor and the rich, living between them, in a life mostly good. At least a whole lot better than where the half kith were made to live.

Then there were the high kith. The rich people of this island. They had everything. Could buy everything. This book had magic, small pieces of it. The rich had drinks with magic that made them behave different. Changed their looks for a while, gave them happiness. But these rich people were not kind people. They did not help the poor beyond the wall. They cared only for themselves. We learn very much about these different types of people in this book. And there is so much still to know. And I cannot wait to learn it all.

But this story was about Nirrim. About Nirrim and Sid. A woman that she meets in prison. Whom she first believes to be a man, because of her short hair and her men's clothes. Sid get her out of prison after only three days. Because Sid is not like Nirrim. She acts like she is high kith. People believe she is. But she is not from this place. She is a traveler. We only get to know her personally a little, but to me it was obvious who she was. Which I loved. I also very much adored Sid. She was all kinds of fierce and full of trouble.

Nirrim and Sid starts an unlikely friendship. I very much enjoyed reading about them getting to know each other. They are both fierce and they both know what they want. Sid enjoys telling lies and doing what she wants. But she can also be honest and so sweet. The romance in this book is gay. And it was all kinds of fantastic. Nirrim and Sid fit together really well and I adored them so. This romance have many problems to face too, of course. And I am so nervous and worried about it. But yes. I shipped them so very much.

The reason for why I am giving this book four stars is because of the mentions of Arin and Kestrel. Well, they are only somewhat mentioned. They are made to seem like horrible people, twenty years later. And that only breaks my heart. They are made to sound cruel and not kind at all. Which is not what I wanted. But. I'm hoping it will be made better in book two. Though it could also be worse, because of the ending. Gosh. I hope not. I also found the book to be slow; nothing really happened. But I did not really mind that.

The Midnight Lie was pretty much perfect. I adored the characters and I loved the world. The writing was gorgeous, as always. The story was pretty excellent too. The ending was way too rude, though. And now I simply cannot wait for book two. I'm sure it will be all kinds of amazing. You should all read this book too. You do not have to read The Winner's Curse trilogy first, but you really should, as those books are so fully good too. This book stands alone. But even better together. And I am so thrilled to have read and loved it.