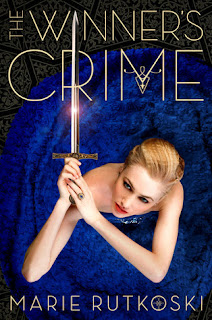 Reading this book again broke me. I knew it would be painful to read it. But I also knew I would still love it to pieces. Which I did. But it hurt so badly. This book was the worst. Yet I adored every moment of it. Parts of it still made me so angry and hurt. It was so good too, although my heart broke again and again. So rude.

The writing was, as always, perfection. I love the characters the very most. The setting was so great. I  love getting to know more about this world. This book mostly takes place at court, with balls and events at all times. It was very interesting and so painful too. This book completely ruined me. I loved it tons, because of that.

There is so much I could share about this book. But I will not be sharing too much, because my heart is too broken right now. I'm also very excited to re-read The Winner's Kiss next. I remember loving that one even more and I simply can't wait to read it again. I know it will hurt. But the worst of the pain is over now, at least for me. And so I'm beyond excited to get started on that one. I'm having trouble finding the words to describe how much this book means to me. It hurt me so very much. It had a bunch of things that just hurt and hurt and hurt. Yet I loved it so. I adored Kestrel the very most and she was so broken yet strong in this that I loved her even more. I was upset with Arin a lot of the time, ha, but I also could not blame him one bit. Still love him so much too.

In this book, Kestrel is engaged to the Emperor's son. She is living in the capital, at court. Her whole life has to be kept secret. She cannot show her fears or her real feelings about anything. And she cannot let Arin know that the only reason she is marrying this person was to save his life. This book was so so sad. And it hurts to think about it. But it was so important too. It shows how badly Kestrel loves Arin. How she did everything for him, without ever letting him know, to keep him safe. At least, she tried her best for him.

It is a book about how these two people who love each other but cannot be together. Arin is no longer a slave. His country has been freed. But it does not feel like it. It feels like the Emperor has plans for Arin's people, and not any good ones. It's a story about how Kestrel tries her hardest to survive with herself and with trying to help people in the only way she can. She somewhat becomes a spy. It doesn't end well. But she is trying. And trying not to get caught, which would be death. Kestrel was not the best at being subtle.

I do not know what to say about this book. I have no words for all of it. It made me hurt so. Kestrel had to keep so many secrets from Arin. She hurt him a lot. But he hurt her too. He did not see through her lies. I wish he had realized what she was doing, that he had helped her. But it was impossible. And that is also what made this book so good. Kestrel went through a lot. As did Arin. And they had to go through all of it alone. Which hurt even more. But I loved it too. But gosh, I need these two precious characters together.

There is so much I could say about this book. Yet I still do not have the words. It was so painful. It was so excellent. It hurt my heart to read about Kestrel and Jess, how hurt she was, how she gave up on Kestrel. It hurt so much. We got to know a few new characters. Like the son of the Emperor. Whom I grew to love. There were no feelings between him and Kestrel. But they grew to be friends. And I liked him tons. Sigh. Then the ending happened. And it broke me even more. So horrible and so very well done. Loved it most.

The Winner's Crime is a must read sequel. It is heartbreaking and all kinds of epic. There are moments of romance. But more moments of pain and sadness. It was every kind of perfect. So painful. So good. This whole series is perfection and you all need to read these books too. I cannot wait to read more books by Marie. She's amazing. Reading the story of Kestrel and Arin is the very best. And I can't wait to read how it ends once more. Although I never want their story to actually end for real, haha. I love them too much.