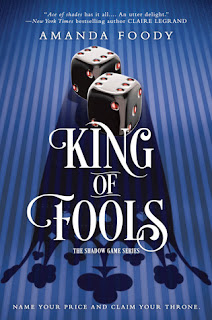 KING OF FOOLS (The Shadow Game #2)
BY AMANDA FOODY

Indulge your vices in the City of Sin, where a sinister street war is brewing and fame is the deadliest killer of them all...

On the quest to find her missing mother, prim and proper Enne Salta became reluctant allies with Levi Glaisyer, the city’s most famous con man. Saving his life in the Shadow Game forced Enne to assume the identity of Seance, a mysterious underworld figure. Now, with the Chancellor of the Republic dead and bounties on both their heads, she and Levi must play a dangerous game of crime and politics…with the very fate of New Reynes at stake.

Thirsting for his freedom and the chance to build an empire, Levi enters an unlikely partnership with Vianca Augustine’s estranged son. Meanwhile, Enne remains trapped by the mafia donna’s binding oath, playing the roles of both darling lady and cunning street lord, unsure which side of herself reflects the truth.

As Enne and Levi walk a path of unimaginable wealth and opportunity, new relationships and deadly secrets could quickly lead them into ruin. And when unforeseen players enter the game, they must each make an impossible choice: To sacrifice everything they’ve earned in order to survive...

Or die as legends.

I'm still unsure if I wish to read this second book or not. Aaack. The first one was a three star for me. I did like it a lot. But I'm.. not really in the mood for more? At least not right now? Gah. Romance disappointed me. And I feel it will continue to disappoint me; and I can't handle more bad romances. So yeah. I need some reviews of this one first, before I know for sure if I will read it or not :D Still. Right now I'm curious.
What are you waiting for on this foolish Wednesday?
Posted by Carina Olsen at 6:00 AM