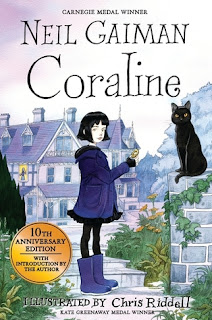 I have been meaning to read this book for years now. As I very much love the animated Coraline movie. And I have wanted to read and love the book too. And now I finally got the chance to read this book. Sadly, I ended up being a bit disappointed by it. Sigh. Still, was a three star. For me, the movie was much better.

Even so, this book was not bad. Was simply not that good either. I very much loved the small pieces of artwork inside of the book; it was stunning. I found Coraline to be all kinds of adorable. And the cat in this book was the cutest thing. Which was pretty much everything I liked about this one. I liked that it was easy to read.

As this book was all kinds of short. For the most part the writing was okay, but it was sadly not for me. I did not like the way it was written; as it made me feel nothing for the story or Coraline. Yes, I adored her, and I found the story to be interesting, but I did not care. I so wanted this book to make me feel more, but it did not. This book tells the story of Coraline. She's just moved to a new place with her parents, and she doesn't know what to do with her days. She loves to explore. She ends up finding a small strange door. It leads nowhere. Until suddenly it does. In the other side, she finds a different mother and father. They have buttons instead of eyes. They feed her well, and she do seem to like them. But this other place is not safe. At all. And that is this story.

When it comes to the differences between the book and the movie. For me, personally, the movie was so much better than this book. Yet the book wasn't bad. And there were things that I liked about it, that were not included in the movie. In this book, Coraline is a lot younger. It is not stated that she has any friends. Her parents don't play with her, but they aren't rude as they were in the movie. And book Coraline was not very rude either, like she was in the movie. She was more soft. Yet I love movie Coraline more, haha.

This book also did not have Wybie. Which was just the saddest thing. That boy was so awesome in the movie. And the dolls in the movie too; I missed those. I felt like the movie was done better. It told a better story. Because I felt like this book left so much out. It did not do a good job of telling this story. It was a bit too boring and too short and too few details. Coraline only spends one day with the other mother before her parents are taken by her. It all happened a little too fast, I think. It also was not as scary, to be honest.

But even though I loved the movie so so very much more than the book, I did not hate this book. I just felt a bit disappointed by it, to be honest. I was expecting more. I wanted better writing. I wanted more from the story. Instead I got a story that was even less than the movie. So rude. I really did like reading about Coraline, though. She was adorable and small and just cute. While this book was not that scary, it was still interesting and a little creepy too. I'm glad that I finally gave it a try. Even if it was not perfect for me.