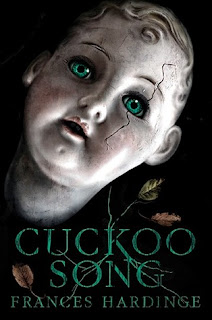 This was such a weird book. And I'm trying my best to figure out how I felt about all of it. Parts of it I liked a whole lot. But so much of it felt a bit silly, and the writing was a bit too much most of the time. But for the most part, I did enjoy this book. And so I give it three stars. It was mostly good, and yet not enough for a re-read.

I wanted to read this book because of that different yet awesome cover. And because the summary sounded great too. It seemed like kind of a dark mystery type of book. And, well, it kind of was. But also not dark enough for me. Also wish there had been more mystery. There is magic. And a bit of faeries. Mostly interesting.

Though I enjoyed this book a lot, I sadly did not love it. A lot of the reason for that is because of the writing. Was just too much, simply said. Too many descriptions that I just barely managed to read. A thirteen year old girl would not have been thinking those descriptive things, especially not this girl who had been stuck in her home for years. And so it was a bit distracting. Even more so because there was no need for it. Did not find it to be written well because of all the descriptions. They were simply annoying, and made me dislike parts of the book. Other than that, the writing was mostly okay. I did like reading from the point of view of Triss. Though I did start liking her less near the end of the book, as I felt like she was getting too soft, if that's even possible, haha.

This book tells the story of thirteen year old Triss. She woke up with no memory of this past day, where she fell into water and ended up getting pretty sick. She is feeling weird after this accident. And she does not know why. There is much going on in this book. With Triss. And her family. Most of it interesting. And getting to know Triss was great too. I liked this girl for the most part. She has been sick a whole lot these past years, and because of that she has not experienced so much. Wish there had been more of all that.

There is so much going on in this book. There is no way I could mention all of it. But I shall write about a little of it. Triss is trying to figure out what is wrong with her. Why is she so hungry all the time. Why does her little sister hate her so very much, and seems scared of her. She want answers, yet she is scared of getting them. And she should be. Because the reasons for why she feels so different are pretty huge. And were so interesting to read about. It's a bit shocking, a little exciting, and a bit too little at the same time.

What bothered me most about all of this was the way she was eating everything. It was mostly just gross to read about. How she ate rotten fruit, how she ate things. It was a bit too much for me, a bit too silly. But the rest of this book was mostly awesome. I was so curious to know more about Triss and her mysterious illness. And her family. Gosh. I cannot with her family. Her little sister, Pen, eleven years old, was so very complicated. At times I hated her, for her choices. But at times I also understood her. So so complicated.

But their parents. I did not like them one bit. They had treated Pen so badly for so many years now. And they had not really treated Triss any better either. Keeping her sick. Keeping her locked up in her house. Away from school, away from friends. It was not good for her and they were not doing it to be kind. It was a bit horrible to read about. I just did not like these parents at all. Hmph. Then there was Violet. I did not grow to love her, sadly, but she was such an interesting character. And I liked her scenes a whole bunch.

I'm not going to say more about this book. Just that there is a lot of magic involved, in weird ways. Most of it were pretty interesting to read about. But I also felt like this book could have been more. More dark, more horrible. I also felt like both girls were way younger than eleven and thirteen. And that bothered me too. Hmm. But I did like reading about them. How they went from hating each other, to slowly start caring about each other. It was written well, most of the time. And I liked getting to know their story and the end.

Despite my mixed feelings about this book, I am glad that I read Cuckoo Song. It was different. I liked parts of it a whole lot. The ending was pretty good too. Mostly happy. I very much liked the time period this book was set in, though I wish there had been more details about all of that. It was good, though. I mostly liked Triss too, and her story was pretty interesting. If you have not read this book yet, I do think you should give it a try. A bit dark, a bit of magic, and the complicated relationship between two sisters.