I am so excited to be taking part in the international blog tour for Tempests and Slaughter today :D I just finished reading this book on Monday, and it was a four star read for me. Today I'm sharing my review of it, and sharing a bit about the book too. This was my first book by Tamora, but I am very sure that I will be reading more by her after this. Thank you so much to Penguin Random House International for letting me take part in this gorgeous blog tour, and for sending me a free copy of the international paperback version of this book. It's so stunning. Love this cover so much. I'm also sharing some pictures I have taken of this book. Eee. Can't help but love those a lot, haha. Have you read any books by Tamora? If so, which where your favorites? :D Hope you will all read this awesome. I can't wait to know more about these characters.

Confession: this is the first book I have read by Tamora Pierce. And it was a book that I enjoyed so much. I do own her Alanna books, and I'm hoping to read them soon. This book was a four star read for me, and I ended up liking it very much. I have a whole bunch of thoughts to share about it, though. Most of it being positive, some a bit negative. Going to start by saying that I loved this writing a whole lot. The entire book was written so well, and I'm very happy about that. The book is all kinds of long, which I liked very much.

I can't help it, I have to start by saying that I thought this would be a young adult novel. But it was not. It was, to me, very much middle grade, considering the main character is ten years old in the beginning of the book, and only fourteen at the end of it. I feel a bit disappointed, as I was sure this would be a book about older characters, with adventure as the summary mentions, and this book had neither of those. But I will say that even so, I liked this book a lot. Because I cared for all the characters. And loved this world.

This book tells the story of a boy named Arram. When the book starts he is ten years old, and have spent a few years already at this magic school to learn more about his Gift. He is quite strong at magic already, especially considering his age. This book tells the story of his years at this school, from he is ten until he his fourteen. Pretty sure the next two books will be at the school too. Ack. I grew to love Arram a whole bunch. He was such a gentle and sweet and awesome boy and I loved reading about him. Was adorable.

But I shall admit that I was a little bit disappointed with this book. Yes, it is a four star for me, because I adored most of it, and I did not want to stop reading it. But, well, nothing happens. There is not a single exciting moment in this book. Yes, I loved it, but I will admit that I am not sure how I loved it, haha. As I usually crave action and excitement so much. Hmph. I so wish this book had been more exciting. That even anything had happened, lol. But despite nothing much going on, it was still such an interesting book.

And I did like it a whole lot. Learning about Arram was awesome, and I loved his struggles growing up as the youngest person in the school who was so amazing at magic. Arram gets special masters teaching him, which almost no one else gets. His first years at the school he had no friends, and he was bullied. But when he was ten, and the book begun, he met Ozorne and Varice. And they became such stunning friends. They were both a few years older than Arram, but they did not care about that. Made me happy.

And gosh, these other characters. I don't know how to describe them. But loved them lots. Ozorne was amazing, yet I felt like he could have a dark side too, which hurts my heart already. But yes, nothing dark happened in this book. Ugh. But he was such a great friend for Arram, and that made me so happy. They were awesome together. And oh, Varice. I adored that girl beyond words. She was fierce and fun and just amazing to read about. I wish there had been more about her, would have loved to read her point of view.

Since Arram is between ten and fourteen in this book, there was not much romance. Which I must admit confused me. Because the very first time Arram sees Varice, when he is ten, he thinks that he is going to marry her one day. And at age eleven there is this whole scene about his first erection. Which was a little bit disturbing. A tiny bit more about it, then just gone. And he seems to have girlfriends all the time, yet we never see them hang out or got to read about his first kiss. I must admit to feel a bit disappointed about it.

Especially since the summary mentions that Varice gets closer to his heart. And I did see that. He seems to love her for all these years. But nothing happens. Not until the very last few pages. Hmph. And he has dated a lot of girls before that, which makes me a bit sad. Sigh. But anyway. There were no details, so I'm not too upset about it. Just wishing there had been more romance in this book. Aw. But there is mentions of romance between other characters; those were pretty adorable. I liked reading about them very much.

There is so much going on in this book. I'm not going to mention all of it. Okay, I mean, just about nothing happens, as it's all on the school grounds. But Arram learns a lot of magic. He even heals a lot of people, and gosh, those scenes hurt me a little. Disgusting and sad at the same time. There is a lot of mentions of slaves in this book, and that killed me too. This world was so interesting, yet so sad and that hurt my heart. Arram wants better for this world. And I do too. While I had some issues with this, I enjoyed it too.

This was such a slow book. And while I normally would not have liked that, I pretty much loved this book. I just really enjoyed reading about the characters and getting to know this world. I even found the magic school to be interesting to read about, and liked reading about Arram's classes. I adored his two closest friends so much. There is also mentions of Gods and such, which I found interesting too. Especially this very huge crocodile god. He was awesome. And oh god, the cutest bird is in this book. Preet. Loved her.

Huge thank you to PRH International for giving me a copy of this book to read and review, and for letting me take part in the very awesome blog tour for the book. This was my first book by Tamora, but it will not be the last. I'm so excited for the next two in this trilogy as well. Eee. Now I'm going to search for all kinds of spoilers for these characters, as this book was a prequel of sorts. Tempests and Slaughter was such a well written and interesting book. I completely fell in love with the characters and the world. Enjoyed it so. 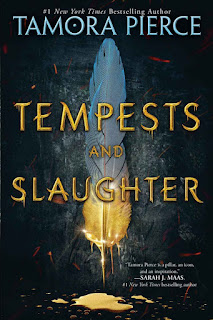 Arram. Varice. Ozorne. In the first book in the Numair Chronicles, three student mages are bound by fate . . . fated for trouble.

Arram Draper is a boy on the path to becoming one of the realm’s most powerful mages. The youngest student in his class at the Imperial University of Carthak, he has a Gift with unlimited potential for greatness–and for attracting danger. At his side are his two best friends: Varice, a clever girl with an often-overlooked talent, and Ozorne, the “leftover prince” with secret ambitions. Together, these three friends forge a bond that will one day shape kingdoms. And as Ozorne gets closer to the throne and Varice gets closer to Arram’s heart, Arram begins to realize that one day soon he will have to decide where his loyalties truly lie.

In the Numair Chronicles, readers will be rewarded with the never-before-told story of how Numair Salmalín came to Tortall. Newcomers will discover an unforgettable fantasy adventure where a kingdom’s future rests on the shoulders of a talented young man with a knack for making vicious enemies.

Tempests and Slaughter is published by Random House. International ISBN: 9780525578543. 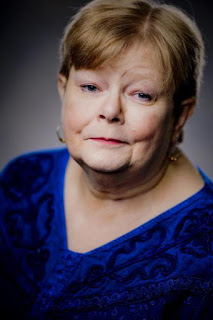 TAMORA PIERCE is the #1 New York Times bestselling author of over eighteen novels set in the fantasy realm of Tortall. She first captured the imagination of readers with her debut novel, Alanna: The First Adventure. Since then, her bestselling and award-winning titles have pushed the boundaries of fantasy and young adult novels to introduce readers to a rich world populated by strong, believable heroines. Her books have been translated into many languages, and some are available on audio from Listening Library and Full Cast Audio. In 2013, she won the Margaret A. Edwards Award for her “significant and lasting contribution to young adult literature.” Pierce lives in Syracuse, New York, with her husband, Tim, and their cats, birds, and occasional rescued wildlife. Visit her at TamoraPierce.com and follow her on Twitter at @TamoraPierce. 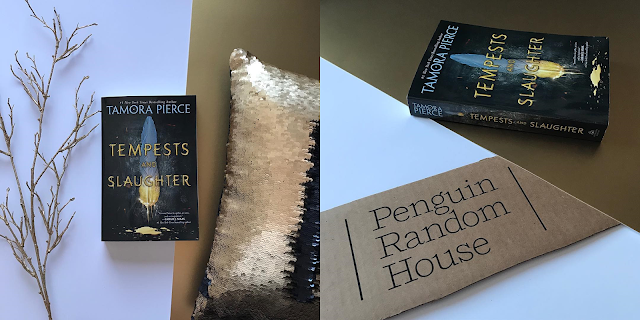 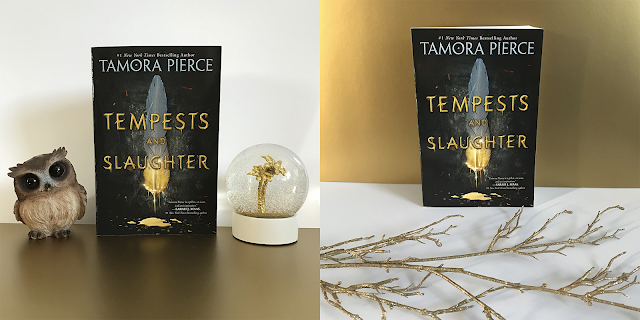