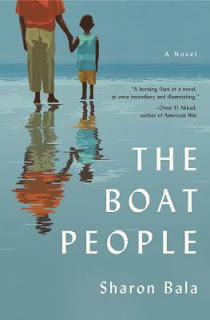 This was not a book that I would normally read, as it's adult and fiction, but when I was asked by the publisher if I wanted to read and review this one, I could not help but give it a chance. And I'm glad that I did. Because this was a pretty important read. Parts of it were real, though most were fiction. All of it were good, though.

I found the writing in this book to be pretty great. It was hard at first to figure out who were talking and such, as it wasn't written in the usual way. But I got used to it, and enjoyed the writing a lot. This book is told from three point of views. Mahindan. Priya. Grace. All had a story to tell, and I liked reading about all three.

But oh, I have a lot of feelings about this book. And a bunch that I need to talk about. This one was a three star for me, because it was not perfect. But it was such an important book. And I do feel that everyone should read it. It tells a story from 2009, of a boat with over 500 refugees from Sri Lanka arriving in Canada. They all think they are finally safe, safe from war, and in a good place. This is not true. They are not free to live in Canada. They are all put in a jail, men in one, women in another. They are all treated good, and are fed well, but they are still captives. And reading about this was pretty horrible. Not going to share my personal feelings on refugees, but I will say that we are all human, and should all be treated as such. We are all worthy of the same life.

Reading about Mahindan was heartbreaking. He is one of the people from the boat, age mid-thirty. He has his small son with him, six years old. Through this book we get to know about his life. How his wife died. How the war in Sri Lanka affected his life. It was sad and so interesting to read about. I liked it a lot. Mahindan was complicated, yet a great character too. His relationship with his son killed me. Mahindan has to spend months in this prison, waiting to know if he will be let into Canada, or sent back home to die.

Priya was an interesting character to read about too. Her family came from Sri Lanka also, years before Mahindan. Her part in this story is being an assistant lawyer, helping the refugees with their cases, so that they may be let into Canada. And Priya was such a good person. She had a great heart, and I just loved reading about her. Well, most of the time. She was a bit too cowardly at times, to be honest. But oh, her family. Gosh, I loved her family. Learning the past of her uncle was heartbreaking and very awesome too.

Then there was Grace. I think I was supposed to hate this woman. And I did. Because she was not nice. I suppose she had a heart, somewhere. But it was hidden deep. Very deep. And I never got to see her get better. Hmph. Reading about her family and their past was interesting, though. But she as a person pretty much sucked. Which was disappointing. This woman was the one who decided if the refugees had to be in jail, for months, or could be released. Or even sent back. She was not being kind about it, to be honest.

This book is so complicated. And there is so much going on in it. It is a story about refugees. About how their life was good one moment, then the war came, and just about everyone they cared about died. They had a chance to leave, and they took it. But it is not easy in Canada either, as they are being held for so long. Reading about it all was interesting, though. Wish it had been a bit more, as there could have been more endings for all the stories. But it was a good book. Despite some issues, I liked it a lot. Well, mostly.

I'm giving this book three stars, because while I did like it, and found so much of it to be heartbreaking, I also were not that invested in the story. Probably because this is not my genre or the ages that I'm used to reading about. It wasn't as exciting as I'm used to. But this was an important book, even so. But yes. I was a bit disappointed, because of the ending. I can't help but spoil a little. I am so upset about it. Nothing is cleared up. What happened to Mahindan? Is he free? Sent back? I must know. Seriously. It is not said.

And I feel incredibly disappointed by it. It took me ages to read this book, as it was so heavy at times, and then get to the ending, and I'm cheated? What. Not pleased. I do not know what happened to Mahindan. I don't know what happens with Grace. Or really what happens with Priya either. And ugh, I'm so not happy about it. Yes, this book was good and important, and it made my heart hurt. But that ending sucked. And I just feel very disappointed about it. Like the whole book was pointless, in a way. I need an ending. Hmph.

But besides all of that. I am glad that I gave The Boat People a try. It was a stunning and heartbreaking story. About survival and family. About refugees and how some people treat them. About war in a country that I did not know anything about before I read this book. I'm glad I learned a lot of new things. I'm glad I read this book. But yes, ending was not good. Huge thank you to Penguin Random House International for sending me a finished copy of this book to read and review. I think that you should all try this book too.