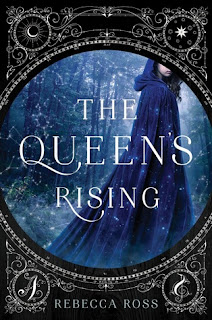 Feeling a little bit conflicted about this book. Had not heard much about it, before I traded for an ARC of it. I have thought it looked gorgeous for months, but had not seen many reviews. And yet it sounded like a great book, so I hoped that I would love it. Which I sadly ended up not doing. But also did like it, some of the time.

I'm feeling so unsure about what I felt for this book. At first, I liked it a whole lot. Found the writing to be great, and enjoyed reading about the main girl. But it was also being so incredibly slow. And once I passed halfway, I sadly grew to dislike the writing and did not care for the story, and just wanted the book to be over. Gosh.

So I'm giving this book three stars. Which feels like too much, yet also too little, as I liked the beginning a lot. But sadly the rest of the book was not as good. I'm going to try my best to talk about this book. But there is so much to talk about, because it is long, and the plot is complicated, but it was also incredibly boring, so there is not that much I can mention either. Overall, though, I feel disappointed in this story. I felt like it could have been amazing. But it fell short. At least for me. I suppose some might love this book. But it ended up not really being for me. But still, a three star is still positive. Because while this book was boring, I did enjoy parts of it. Just wish it had been more. The book was good, but it was not good enough sadly. And that makes me upset.

This book is told from the point of view of Brienna. She has spent the past seven years at this sort of a school, learning about passions. Some people have a passion in life, either for music, art, wit, dramatics or knowledge. These people go to a house of passion for seven years, to learn more about their talent and grow up to be something more. Brienna does not really have a passion at all, for the first four years she tried all of them, then she stuck with knowledge for the last three years. She's somewhat good at it.

About a hundred and fifty pages of this book takes place in this house of learning. Because Brienna is about to learn if she is going to get a patron, or if she is not going to be picked, and be left with nothing. She's stressed about it. I liked this beginning a lot, because Brienna seemed pretty amazing and sweet, and I loved how she had an amazing friendship with the other five girls in this house. It was sweet to read about. Though one of them used her a little bit, and I did not like that at all. Hmph. Still, kind of interesting.

But yes. I enjoyed the beginning of the book. But when Brienna leaves this place, there is no mention of any of the girls again, save one. And that disappointed me. They were her sisters, almost. I wanted there to be more mentions of them. But anyway, before that. The summary of this book is so completely wrong, and that bothers me so much. Brienna was the one who asked for the patron, months later. She searched for him. He did not look for her, not at all. And he did not have dark vengeful thoughts either. Ugh. Weird.

Anyway. I enjoyed the beginning of this book because I liked reading about Brienna and learning about how she did at this kind of school, and how she learned more knowledge and learned many histories. Her friendships were adorable. Then there was her master, Cartier. And oh, how much I loved reading about him, how they seemed to flirt and had started to care for each other. But nothing was happening, it was not allowed, but there were hints, and it was the cutest thing. I liked reading about it a whole bunch. Cute.

But then Brienna had to leave, and the plot fully changed. Sure, the beginning was slow, and took place over about a week, but it was still so interesting to read about. But after she left this place, I got a whole bunch of bored. The patron who took her in was to be her father, and he had a son, her new brother. And it felt totally awkward to me, but was supposed to feel like she got a whole family, after having only lived with her grandfather before. But yeah. It did not feel that way to me. And was only for a few weeks. Hmm.

I'm not sure how to describe this world. It's fantasy, which I love. But was also not described well enough. I didn't feel much for this world at all. I wanted to love it, but it wasn't written well enough for me to do so. There used to be magic in this world, but over a hundred and sixty years ago. And now Brienna's newish father is looking to place a queen back on a throne, and restore the magic in that family line. Brienna is not to be this queen, thankfully, and I did like that part of this story. But sadly, it was not very exciting, aw.

Because most of this book is incredibly long and boring. Just about nothing happens. I liked the beginning a lot, sure, but the rest of the book, not so much. I did not feel like Brienna did anything. I did not feel like she had a journey or whatever. She also spent most of the book away from Cartier. Which means there was zero romance. No kiss until the final page. What. I'm incredibly disappointed. Which is also a reason for why I did not love this book. It focused a lot on politics, but not in an interesting way. I'm disappointed.

I have already written way too much about this book, and not nearly enough when I think about what is in my head about this book. The Queen's Rising was interesting, but not exciting. I liked Brienna and also Cartier, but there was no other characters to care for, not really. I did not love them, at all. Disappointed about that. I felt like this book could have been a whole lot better. But it was not. Still a three star for me, but it is also a book that I will forget about, and that makes me sad. Still, you guys should read it. Maybe.