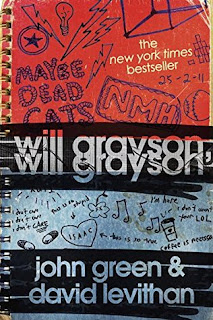 How is it even possible that I'm disliking every John Green book that I'm reading? It makes no sense to me. Sigh. I mean, yes, I don't truly love this genre, but I have read many amazing books from it even so. And my first book by this author was The Fault in Our Stars. I read it twice. I loved it. But that was years ago now.

I still thought that I would enjoy his other books as well. But this is his fourth book that I'm giving two stars to. His fourth book that I hated a lot about. Just. How is this even possible. I wish I didn't feel this way. Really wish I could have loved this one. But simply couldn't. These characters were not lovable. At all. Disappointed.

I don't even know where to begin with this book. I'm going to try my best to share all my thoughts about it. But I have so so many feelings. And just about all of them are bad. So I'm going to start with the good things about this book. As in the reason for why it is a two star read and not a one star. And the reason for that was Tiny. Whom I ended up liking a whole lot. There were, of course, sigh, a bunch of things about him that I did not like. He was not the best friend at all. But he was even so the best character in this book. And I did like reading about him most of the time. But sadly, this was not the book of Tiny. It was the book of Will Grayson. Two versions of him, two different people. One that I sort of liked reading about. And one I just about hated reading about.

The first Will, aka the boy I sort of liked was okay to read about. He wasn't anything special and I didn't care too much about him. His life was pretty boring, to be honest. He's best friends with Tiny, though, and that made me like him a bit more. But when he started crushing on Jane, well. I didn't like that at all. He didn't treat her right. I sort of shipped them at the end, but then again, not really. I felt sorry for this Will at times, because others didn't treat him okay either, but I still didn't like him. But he was kind of interesting.

Then there was the second Will. And I do not even know where to begin describing this boy. He is gay. Which is mentioned a whole bunch. He's depressed. He treats his mom like shit. He jerks off a lot. And he has an internet boyfriend, Isaac. Whom he's finally going to meet, after a year of talking together. And oh. This made me feel for this Will. It made my heart break. But then this Will ended up being shitty again, and I was back to not liking him at all. Shrugs. He could have been a stunning character. But he was not.

The plot in this book is about these two characters meeting. Well, it's not really about that at all, because they spend a few minutes together. It is mostly just Tiny meeting with them both. And the plot of the book is about Tiny making a musical in school about his life. Which I really liked reading about. But there was so much drama about other things that I didn't care for at all. Mostly this book was hugely disappointing. Not much happened at all. I wanted a better ending for just about all the characters. But it wasn't all bad.

I'm not sure what else to say about this book, not really. It's about the second Will being gay. And about Tiny being gay. And about Tiny being extremely big and fat. Which is mentioned so many times that I got a bit annoyed, because it wasn't talked about in a good way. But yeah. Tiny was adorable and I loved him most of the time. Just not enough. Liking one character was not enough of a reason for liking this book. Because it was full of issues. It was not romantic. It did not have great friendships. The ending was okay.

Another reason for why I did not like this book much was the writing. As in, how things were written down. Like in the beginning of the book the Will that I did not like treated his mom like crap. He didn't really get any better either. And the way he talked and thought about people were not nice at all. Like he was into Tiny, sure, but he was dissing him in his head all the time too, and I hated that so so much. And this has happened in every John book I have read this past month. So many bad characters. It is simply not okay.

There is another book out that is the story of Tiny. But it is also written in the type of way that half of this book was written. Which I didn't really care all that much for, sadly. And despite really liking Tiny, I did not like him enough to make myself read a whole other book written in this way. But maybe I'll feel like it one day, as I am curious to know more about Tiny. Aw. Anyway. I did not like Will Grayson, Will Grayson. But I found parts of it to be interesting. And I am glad that I gave it a try, even so. But yes. This was not for me.

Big thank you to Penguin Random House International for letting me take part in this very awesome John Green read along. And for sending me this stunning paperback box set of his books. And I'm so sorry that I have disliked all of them that I have read so far. Gosh. But next week will be The Fault in Our Stars. And I really think I will love it once more. Oh, I hope so. And his new book in two weeks. I think that I will enjoy it. Well, I really really hope so. Anyway. Have you read this book before? Would love your thoughts on it.