Review: Beyond a Darkened Shore by Jessica Leake 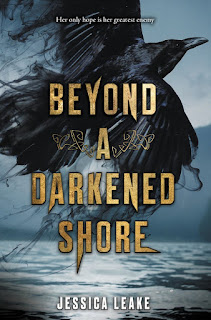 I enjoyed this book a whole lot. The story was so exciting and I simply adored the characters. The writing was pretty great too. At first I thought it might be a five star, but I ended up having a few smaller issues, so four stars it is. But gosh, I really liked this book. And I cannot wait to own a finished copy of this gorgeous.

This book tells the story of seventeen year old Ciara. It's set way back in time, and I loved that lots. And oh, how I adored this girl. I loved that the whole book is from her point of view. And I loved getting to know her. She was awesome. I loved how much she cared for her sisters. I hated how her parents didn't care for her.

The plot in this book was so exciting. It takes place ages ago, in a place with magic. The magic isn't a big part of this world, just small things. Ciara has magic in her. She has the ability to enter the mind of a person, and change it. This was pretty interesting to read about. I did like how her ability changed later on, though that new part was a bit too much, maybe. But it was interesting to read, and I liked that. Ciara was pretty awesome. She both loved and hated her ability, and I liked that about her a lot. Her world has been at war for ages now, with the dangerous Northmen coming often to raid their village, stealing and murdering. Her older sister got murdered because of this years ago, and Ciara has sworn revenge. It was heartbreaking yet amazing.

This book begins with a raid on Ciara's village. And it was pretty interesting to read about, yet a bit brutal too. Lots of death. It ends with Ciara taking a boy prisoner. This boy is Leif. So begins this story. These two enemies are meant to become allies, to help defeat something evil that is coming for everyone. Ciara has been told this by a crow person. Which sounds weird, yet was pretty awesome. But yeah. Ciara and Leif pretty much hate each other, but they also seem amused by each other right away; and I loved that.

There is so much happening in this book. I'm not going to describe all of it. Just that this book is long yet not long enough. And the villains were all kinds of evil and I hated them. Yet sort of didn't truly understand the reason for why they were so evil. But they were and they were awful. And their way of killing was the worst. Aw. Yet so fascinating to read about too. But also the worst. Yet so good. How rude. But anyway. The story in this book was all kinds of awesome. There is even a kelpie. Which was so creepy and great.

I really enjoyed the romance in this book. Ciara and Leif are so different yet so the same too. They both had a loss in their life. They have lots of other things in common too. And oh, reading about them slowly learning to trust each other and become friends was the best. Eee. Nothing happen for at least half the book, and I was okay with that. Because just reading about them being together was all kinds of fun. And when the romance did happen, I loved it so. They fit together so well and I shipped them the very most.

The reason for why this book was a four star and not a five, was because of the magic. Sort of. I felt like some parts of it were a bit too much. It was always exciting, but maybe a bit too much. But despite that, I enjoyed this book so very much. The story was so interesting and so evil. There is a lot of death in this book. Some heartbreaking. Some awesome. The ending was pretty good, though. First totally evil. Hmph. But then good. Pretty sure this is a standalone, and it doesn't need more, but I would not say no to more.

I'm not going to say much more about this book. I find that I simply have no more words to describe why I liked it and how much I liked it. Which was a whole bunch. I loved most of this book. And it was all just so exciting and I adored the characters so much. Sigh. I would love to read more about them all. This book is mostly about Ciara and Leif, though. And I adored that. There is a lot of fighting. And a bit of awesome backstory. And lots of great flirting. Yess. This whole book was amazing. Sigh. I'm so happy that I read it.

Huge thank you to the publisher for the auto-approval on Edelweiss, eee. I'm so thrilled that I was able to read and review this book early. Now I just have to hunt down that print ARC, because I need it like crazy. This book was so so good. And it's gorgeous. I love that cover so much. Beyond a Darkened Shore was everything I was hoping it would be and more. Fierce characters and a stunning slow romance. Exciting plot and evil villains. I'm so glad I read this book. And I think you'll all love it too. And so go order it. Now.