Review: An Abundance of Katherines by John Green 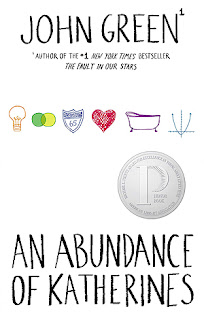 I have no idea what to write about this book. This is my third book by John, so far. Planning on reading them all. I didn't like Looking for Alaska some years back. But I  did love The Fault in Our Stars years ago. But this one I did not like much at all. I'm thinking two stars. But I feel so blank about this whole book, to be fully honest.

There were things that I enjoyed about this one. But there were also things that I just read and didn't care about one bit. Which was just about the whole book. Sigh. I'm glad that I finally gave this book a try, but I'm also disappointed, because I had sort of hoped to enjoy it, despite knowing I most likely would not. Rude.

But yeah. I did not like the writing in this book. Probably because a lot of the book was about math. And how upset Colin was about Katherine #19 dumping him. I wish I could say that I liked reading about Colin as a person. But I really didn't. I didn't hate him, as I didn't feel strongly about this book at all, but I also did not like this boy. He's supposed to be a prodigy, or whatever. Like really smart and such. But he has been dumped nineteen times now. And he has only been dating girls named Katherine. I would feel sorry for him, as he got bullied and hurt in school while growing up, and he spent years without friends. But then I saw a reason for why the latest Katherine had dumped him. She mentioned that he kept asking her all the time if she still loved him. Ugh. And other weird things. Which was just, not okay. It made me like Colin less. I felt sad for him, but only sometimes.

This book pretty much tells the life of Colin. How he feels after being dumped once again. And how his best friend, Hassan, has decided that they are going on a road trip. Where they end up in a small town, where they stay for weeks. I sort of liked reading about this town. It was interesting, sometimes. But other things about it all was so cliche and not in a good way. Like that boyfriend of Lindsey. Sigh. I totally saw that coming, and it was just highly annoying and I truly did not like reading about it one bit. Was not good.

But anyway. This book did have some interesting characters. Though I did not like Colin, I loved his best friend. Because Hassan was pretty awesome. And fun at times. I just didn't find most of this book to be fun, sadly. But Hassan was still great. Though he too annoyed me at certain moments. Sigh. But I liked getting to know him. Then there was Lindsey. Not a romance book. But beginning of one, maybe. I did like this girl, I just didn't care that much about her. Was curious, though. Also, her mom was awesome.

I honestly do not know what to say about this book. It wasn't all that short. And it took me hours to read it. And I was sadly pretty bored in all of these hours. Yet I did finish it. And this is why this book is a two star for me. And I still feel a bit conflicted about my feelings for it, simply because I'm still not sure what I felt about this book. Most of it was boring stuff. Yet I kept reading, and I liked a few parts of it. But yes, I do know that I will not read this book again. And so I do feel pretty okay with my two star rating of this thing.

My review is way too short. And so I shall try to mention the plot a little bit more. This book is about Colin trying to get past his heartbreak over Katherine. And him trying to do a theory kind of thingy. Made zero sense to me and was incredibly boring. Sigh. But yes. There were some good scenes in this book as well. Like when they were pig hunting and got stung by hornets. I liked that, hah. But then that scene ended up with them catching someone doing something bad, and it just about ruined everything. It bothered me.

Big thank you to Penguin Random House International for letting me take part in this very awesome John Green read along. And for sending me this stunning paperback box set of his books. And I am glad I got the chance to read this one. Just sorry to say that it wasn't a book for me. Sigh. But I'm hoping I will have more luck with his other books that I haven't read yet. Fingers crossed. Either way, though, I do think that some people most likely will love this book a lot. I'm curious to know what everyone think about this book.