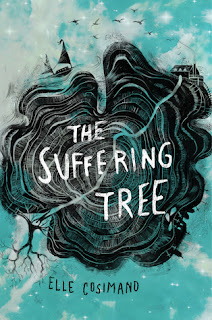 Been wanting to read this book for ages now. Because it looks gorgeous; love that cover so much. And it sounded pretty good too. Finally got to read it, but oh, I'm pretty disappointed. Giving it two stars. Which break my heart a little, because I really wanted and expected to love this book. How rude. But it was so different.

Like, the goodreads summary is not very correct at all. It doesn't mention at all that Tori is cutting herself. And that she has been harming herself all the time for months, that she is full of cuts. It didn't bother me, but it could bother a lot of other people. It did bother me that I never got to know why she cut herself, though.

It also doesn't mention that a lot of this book takes place three hundred years earlier, in flashbacks. There were a lot of those scenes. And I am not sure if I liked them or not. They were my favorite part of the book, because those scenes were a lot of heartbreaking and awful. About slaves. About how they were treated. It wasn't nice to read about. But it was interesting, and I cared more for those characters. But I also didn't love it, because Nathaniel was in love with Em for years, yet she was in love with someone else. And reading about that just broke my heart, because this boy did not get much happiness at all. And neither did Em. Their years as servants were not good years, reading about it was heartbreaking. Some parts were boring, though.

But this isn't really their story. This book is about Tori, taking place our time. I wish I could say that I loved this girl, but I didn't, not really. I felt nothing while reading about her. I was curious about her family; liked some things about her too. But for the most part I didn't really like her. I didn't like reading about how she hurt herself every time she couldn't deal with something. It was painful to read about. I still didn't know why. She started before her father died. Think she was raped, but it was never said. I needed it said. Aw.

This book is about Tori moving with her mom and brother to a new place that they suddenly got from a dead guy. They don't know why they were left this house and land, but are trying to figure it out. The neighbors weren't very nice at all. Ugh. And there was a boy, Jesse. Seemed like he could have been a weird type of love interest, but he wasn't. He was a bit cruel and awful; he even went through all of her stuff in her room one day, and she did nothing about it. That bothered me too. But he wasn't important.

But yeah. I'm not sure what to share about this book. Don't really feel like writing much about it. It's about Tori seeing a boy coming out of the ground, clawing his way up. Nathaniel died three hundred years ago. He was cursed, sort of. And I liked reading about this boy a lot. Was so curious about his story. But, well, Tori never asks him about any of it. And that bothered me too. All I know about him is the scenes from the past; which isn't something he was telling her about. Wanted that. So yeah, that was disappointing too.

I'm not sure what else to say. I liked reading about the past. Though I only really enjoyed reading about Nathaniel. Tori just bothered me. She has two friends in this new place, but I cared nothing about either of them. One of them didn't tell her the truth about something important. And they just weren't really there. As Tori kept so many secrets from everyone, and I didn't approve of that either. Sigh. I felt like this book could have been so much better. Yes, I enjoyed some of the plot, but not most of it. I wish I had loved it.

Then there was the romance. Sigh. I felt nothing for the romance at all. And that bothered me a lot as well. I thought it would be swoony and awesome, but it was neither. I liked Nathaniel a lot, and I sort of liked Tori, but I didn't ship them together at all. Didn't get why they should get together. Plus the romance was really small and weird too. Didn't get why they were attracted to each other, or how it happened. One small kiss. Then second kiss turned into too much, and it just felt awkward to me. Just, so so depressing.

I wish I could say that I loved this book. But I didn't. I found the plot to be exciting most of the time, and I wanted to know how the book would end, but I also didn't care much. I just wanted the book to end at times, which isn't a good thing. Aw. I also didn't think the ending was very exciting; felt like it could have been more. Aw. But I am glad that I tried this book. Just wishing it had been better. Curious to know what others think of it, though. Have seen someone love it, and someone not finish it. Aw. Need more opinions.