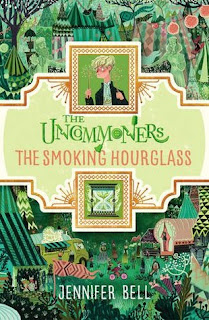 I had so hoped to love this book. Because I read the first one a few months ago; I liked it a lot, and I felt sure I would enjoy this sequel even more. But oh, how I was wrong. So disappointed by this one. I'm giving it two stars, and even that feels too kind of me. Gosh. I really wish I had loved this book. Thought I would.

I wish to start by saying what I enjoyed about it. Because there was not much, but I did like a few things. There are illustrations inside, and they are so precious. I loved them lots, and wish there had been more. I found the plot of the book to be exciting a few times, felt like it could have been so amazing, aw. But it was not.

And sadly, there weren't anything else about this book that I did like. This book is the sequel to The Crooked Sixpence. It takes place a few months later, but there is zero mention about what happened in those months. Which was a bit disappointing. I did like reading about this world; the underground in London, where certain people are trading and having a good time. There is a bit of magic, which was interesting to read about. But sadly it wasn't enough. Because I couldn't stand the writing in this sequel. Which makes me very sad. I simply could not connect at all. Or focus much either. I just wanted the book to be over. Which is the worst feeling to have while reading. Especially considering that this book was pretty long. Usually love that. Ugh. But not now.

One thing that bothered me the most was that I didn't feel any connection at all between the characters. They never talk to each other. They don't do friend stuff together. Sure, they are together, but the writing doesn't focus on it at all. Just on other things. Not friendship. Not the siblings. I felt no love or anything between these people. Which was so extremely disappointing. As I had expected so much more. Ugh. Middle grade books are usually perfect for me. But this one was not. It was so bad, and so disappointing.

I'm not going to write too much about this book. Simply because I do not want to. I'm just happy to be done reading it. Aw. Which is very upsetting. Have been reading so many bad books this year already, and really wanted this one to be one of the good ones. Ugh. Unsure now if I will read book three or not. Maybe. But it probably isn't out until a year from now, so will see then I guess. Won't say too much stuff that happens in this one, but I must mention a few things about this, as they bothered me a whole bunch.

I said in my review of book one that it reminded me so much of Harry Potter. And oh, this book was even more like those. It wasn't a good thing. The villain was just about the same. How they had made up a new name for the bad guys, because it was too scary to say their old name. How they had this horrible prison. How the main girl gets entered into a deadly game by someone else. How the leader of this underground place turns into a friend of the kids, and are sharing secrets with them. It was just silly. Made zero sense.

I usually don't mind at all when books remind me of other books. But this one was ridiculous with all the likeness. I noticed it very often, and it just bothered me. Aw. I'm sure some people will love this book, but I'm not one of those. I didn't care for the characters at all. Ivy wasn't interesting anymore, because I know nothing about her. Seb was just there, nauseous all the time. And Valian was simply unimportant in this story, yet there all the time. These characters gave me nothing. And that is the biggest disappointment.

Not saying much more now, just, well. I was so disappointed and sad by this book. So wish it had been better. But it wasn't. Not as bad as a one star, but not much better either. I found all the villains to be so silly and have no meaning at all. Didn't care about anyone or what they were doing. The writing just felt off all the time; since it was impossible to connect to anything. Aw. Sadly, I wouldn't really recommend this book for anyone. Sure, book one was a three star, but not perfect either. Still, they both are really pretty.