Review: The Novice by Taran Matharu 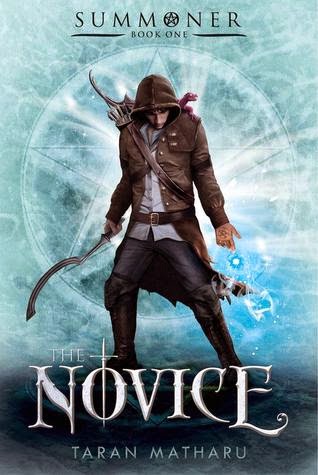 This book was a mess. And not in a good way. I wanted to read this book once I saw that gorgeous cover. And I was so happy when Ksenia at Macmillan Kids sent me a copy of it for review. <3 But then I started it. And my god. This book was awful. I shall try my best to explain all the reasons for why I hated it.

Then there is the main character and the story. This book is told from the point of view of fifteen year old Fletcher. First, I do not like reading about characters in that age. It's weird to me. And this boy. He was just.. so annoying. I didn't like him one bit. I wanted to. But I didn't. Also. Keep in mind. The summary for this book? It sucks. First, it isn't all that accurate. Nothing about it happens until after ninety pages. That whole the fate of the empire is in his hands. What the hell. That wasn't true at all. And if it becomes true in a sequel, well, then screw this series. It is so predictable and in a very bad way. And it is a big rip-off too. At least to me. It has so many things that are like His Dark Materials, The Hobbit, Harry Potter and more. Seriously. It was so annoying. Nothing special about this book at all. Which was such a shame.

I don't feel like talking much about this book. So I won't. Probably. But I will try to explain some things. I do wish I could have liked this book. But for me, the writing sucked. The characters were silly. There was the typical rich kids who were so much better than anyone else and whom just had to bully and threaten and hurt the other kids. Ugh. It annoyed me greatly. There was even a boy in the beginning of the book who reminded me so much of Draco. Seriously. And not in a good way. Sigh. Very annoying.

Then there was the thinking of the main boy, Fletcher. I sort of liked the beginning, getting to know his sort of adopted father a little. But then that was gone and not thought about again. But oh. Fletcher and his thinking. It's bad. And he keeps taking deep, sobbing breaths. I just. It bothered me so much. Such bad writing. And so many things that didn't make sense at all. Sigh. I wouldn't recommend that anyone read this book, to be honest. Sure, some might like it, but I kind of doubt it. Still, I am curious to know.

The plot. I can't. There are demons. Which some very lucky few people are able to summon. And Fletcher, the poor orphan, just happens to be one of them. It was so much like His Dark Materials, and their demons. So many similarities. I hated it. I hated it so much. This book was nothing compared to the other ones. Sigh. Anyway. The demons. They were so many of them and so complicated and written about so much and I couldn't care less. Didn't even manage to fully pay attention to it while reading.

And of course, these humans are in a war. Sort of against dwarfs. And elves. But they are all in war against the orcs. Whom are led by the pale orc. For god's sake. This book sucked. Not a single thing about it was unique. Everything felt stolen from other books. And it bothered me so much. It wasn't done in a good way. This book didn't feel special. And it made me so angry. Sigh. I regret reading this one so much. But I had to. As I did request and get it from Macmillan. Plus, I was sort of curious. Sigh.

I don't know what else to say about this book. Fletcher goes to a magic school. Where he learns magic spells and whatnot. It was so annoying, because it has been used before, in a much better way. Sigh. I'm done talking about this book. It annoys me. Though I wouldn't mind answering questions about it. Sigh. Yeah. I do not think you guys should read this book. Either way, huge thank you to Ksenia at Macmillan Kids for sending me this ARC for review. <3 You are the best. The cover is so gorgeous, though. Hmph.