Review: Lost by S. A. Bodeen 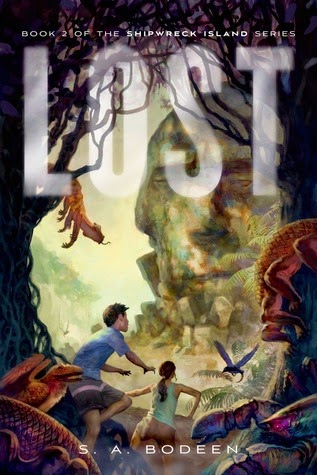 I have been wanting to read this book ever since I read book one, Shipwreck Island, almost a year ago. I really liked the first book. It was exciting and pretty awesome. But also so short, and it ended pretty mean. So I was pretty excited to get this ARC from Macmillan. Had to read it right away. I'm glad I did.

Though I didn't love this book as much as a loved book one, yet I still enjoyed it a whole lot. I just had some issues with the writing this time. Sigh. It felt a bit weird to me. But I still adored the characters and I found the plot to be all kinds of exciting. The cover for both books are all kinds of pretty.

I just. I wish these books had been longer. This one is less than 140 pages. And it is so little. And even with these books being so short, I still have to wait a whole year between them. I don't get that. Publishing is so weird sometimes. Hmph. But even so. I don't really mind waiting. Though I do wish I could read more from this story right away, because oh. Lost ends in such a cliffhanger. Things are not going well for these adorable characters. And I am dying to read more. Fingers crossed that there will be a third book, and I'm hoping it might end up being longer. <3 And maybe get published earlier. Will see :) But I shall cross my fingers. Either way, though, I will read the next book. And hoping there will be many next books. Because I'm curious about how everything will end. And I would love to read much more of this story. Really like it.

I won't be saying much about this sequel. And I won't be sharing all the things that happen in book one. Though I will talk a little bit about both. Anyway. Lost is told from the point of view of twelve year old Sarah. And her new stepbrother Marco, who is the same age. I liked reading from them both. Though I might have forgotten about the switched point of views sometimes, and didn't realize whom I was reading from at first :p Still. I had some issues with the writing, but I liked reading from them both.

I won't say more, as this book is really short, and it isn't out until the end of July, but I do want to say that I thought it was a great sequel. I'm giving it three stars as I had some issues, but I also really enjoyed this middle grade book. It was fun and a bit creepy. I do think you should all read this series. Lost is an amazing sequel. It's full of exciting things and creepy animals. It's sort of a book about survival. I liked it. Huge thank you to Ksenia at Macmillan Kids for sending me this gorgeous book. <3

Goodreads - The Book Depository - Amazon
My review of Shipwreck Island
Posted by Carina Olsen at 7:33 PM