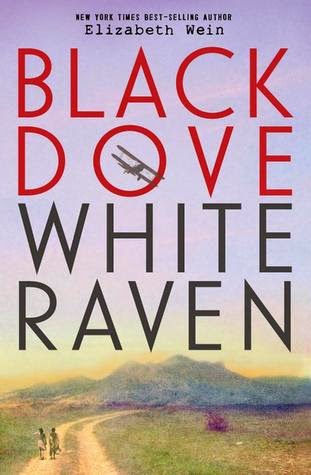 When I read Code Name Verity I really enjoyed it. Then I read Rose Under Fire and I really loved that one. So I was really excited about reading Black Dove, White Raven :) But oh. I wasn't in love with this book. And that breaks my heart. I had some issues with it. Though I did enjoy it a whole lot. Mostly.

It took me months to start this book, as I got accepted for it on Netgalley a long time ago. But I was nervous, as I had peeked at the writing, and wasn't sure I would like it. And. Well. It is written in a weird way, everything like a journal. But I grew to love it. It ended up being pretty awesome. It's good writing.

But then there is the story. I expected that this book would be full of exciting things like the first two war books by Elizabeth. But it wasn't. And that disappointed me so much. And oh, it took me three days to read this book. That is not normal for me. But it was just so slow to read. And I was so bored, because nothing ever happened. I kept waiting for the amazing and exciting to come, but it never did. And I'm still so sad about that. Sigh. But I'm still giving this book a three star, because I found the writing to be beautiful, and I did love the characters a whole lot. I did like the story. I just expected to much more. This book was too boring for me. Sad face. But at the same time, I did like the story too. But yes, wishing it had been more exciting.

I don't feel like saying too many things about this book. As I'm not the best at remembering all the names. Because damn. There is a whole lot of different names in this book, and so many of them I do not remember at all. Much less how to spell them. Ugh. Wishing names were easier, hah. But I did like that there were a lot of characters in this book. Though I only really cared for Em and Teo and their friend who was pregnant then got a child. I liked her a lot. But just.. I didn't feel much for this book.

Which reminds me. I'm disappointed in this book because it was so boring. Because nothing brutal really happened. There aren't many deaths. No personal deaths. No torture. No pain. No kissing, no feelings, no romance. It was all so.. tame. And I don't do tame books. Not my thing. Sigh. Wanted there to be more. But there wasn't. I didn't even like the ending, because it was pretty sudden, and there should have been a whole lot more included before it ended. Hmph. So yes. Not pleased about the ending.

I'm not sure what to say that this book is about. Because I don't really know what the meaning of it was. Sure, some things were kind of sad, not for me, but still. It is about Em and Teo. She is white, he is black. Their mothers are soulmates. Then his mom die. And god, how I hated Em's mom for how she shut down after that, and didn't take care of them. Which happened early, for a short moment, and I never grew to like their mom. Hmph. Might be because of how it was written. I'm not fully sure.

A lot of this book is about being a pilot. Their Momma flies a small plane. They get to learn once they are a bit older. And while I thought it was kind of good to read about, I also got bored so damn fast. Which was sad to me. Sigh. Then there is about the war in Ethiopia and how it affects them. I liked reading about them living there, and the things they did. But it was also so boring. Even the war was boring. Which I don't get how it could be boring. Just. I wanted more. More details. More everything.

I don't feel like talking more about the plot. It was disappointing and I wanted so much more. Hmph. But this book is about the characters. And how awesome Em and Teo are as siblings. I did love that. But also too little of it. And oh. I did like Teo a whole lot. But he was so boring too. Ugh. Then there is Em. And my god. I could have loved her so much. SO MUCH. But this book isn't focused on her. And I sort of hated that. I wanted so much more of her. Of her doing things. Of her meeting someone. Or anything. Sniffs.

Well. I feel like I have only said negative things about this book. Ack. Yet I'm rating it three stars. But yeah. It just. It annoyed me a bit, and I wanted so much more, but I also did enjoy it. I did think the story was interesting. And I did like the characters. Just. Yeah. This is a low three star, I think. Black Dove, White Raven could have been so much better. Yet I did like it. The story is kind of sweet and good. But not good enough for me. Yes, I'm saying this a lot, but seriously. I expected so much more.

Huge thank you to the publisher, Disney-Hyperion, for accepting my request to read this book on Netgalley. <3 I'm glad I got to read it a little bit early, and I am excited about getting my pre-ordered hardcover later this month. I'm sorry that I didn't enjoy this book more. But yeah. Not fully a book for me. Sigh. But I'm also happy that I did like it, because the characters were pretty awesome. Just wanted more. It makes me sad. But I do think you should all read this book. Curious to see what you think :)