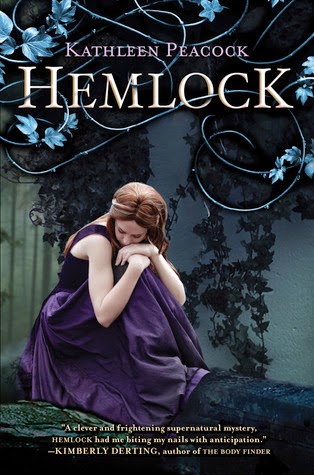 This is the second time I'm reading Hemlock. But it has been more than two years since the first time I read it. And since I have yet to read book two, I now decided that I had to re-read this book. <3 As I also have an eARC of book three. So I will be reading them both next. Which makes me happy and excited.

Reading this book again was a lot of fun. But it was also a bit depressing, as I didn't love it this time as much as I did the first time I read it. But. I still enjoyed and loved it a whole lot, so I'm just going from a five star rating to a four star. Because this book is amazing. I just had a few small issues this time around.

I'm not going to talk too much about this book, as I don't want to share everything that happens. But I will say that there are werewolves in Hemlock. And it is pretty exciting. It is different, yet it reminded me of many different things, which I enjoyed. While reading it this time I had some small issues with the writing, but I still found the plot to be exciting and I still enjoyed the romance a whole lot. And I had forgotten many things that happened, which means I was surprised again a lot of times. Which I liked. Hemlock is told from the point of view of Mac. Whom I liked a lot. Sometimes she annoyed me, but for the most time I adored her. Though I would love to know more about her past. I also liked her guardian, Tess. She's cute.

There were a few things that annoyed me in this book. Like Jason. Whom I have seen other people loving. And oh. I couldn't stand him. He was not a nice person. So what that he had loved Mac for a long time? In secret, just saying. After his girlfriend and Mac's best friend, Amy, died, he did so many bad things. Started drinking a whole lot. Getting into fights. Not being there for Mac. Joining the Trackers. Yeah. I will not forgive Jason. I do not like the things he did at all. Hoping he becomes better, though.

There is another boy in this book. Kyle. Whom I loved a whole lot. And I loved the small romance between him and Mac. <3 It is sweet and real. And I want them together at all times. Though there is also some drama there. Sigh. He has an ex-girlfriend. But there isn't much drama, and it is all over very fast. So it did not bother me that much. And mostly I just adored Kyle. As he is adorable. And loving too. I would love to know more about him, though. Kind of felt like I don't know him well enough, hih.

I'm glad I decided to re-read Hemlock. Though I loved it more the first time I read it, I still loved it now as well. And now I'm more excited about finally reading Thornhill. <3 And then getting to read Willowgrove right after. I think you should all read this book. Also. There is no love triangle. Might become one, but I doubt it. As Jason is not a nice guy. And Kyle is awesome. So yeah. I would not say that this is a love triangle. Not at all. As Mac is in love with Kyle. Best friends with them both, though.

Goodreads - Buy it
Posted by Carina Olsen at 1:48 PM