Mini Review: The Seeds of Wither by Lauren DeStefano 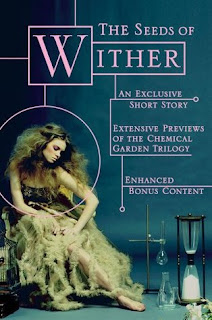 I've had this short story ever since it got published in late 2011. And now I finally read it :) And yeah, it was a whole lot shorter than I had thought. Although this ebook is more than one hundred pages, that's just because it's several chapters of Wither. Which is kind of awesome, if you don't have the book. There's also a preview of Fever, which is kind of cool. But then there is the real short story, which is only a few pages long.

The First Bride is a short story told from the point of view of Rose, Linden's first wife. We don't get that much from her. But I loved a look into her mind, even if it was at such a depressing time. We get to know some things about her before she dies. Before she get Linden to get new brides. Oh. It's depressing, because she's so sick, and all she wanted was to die in her garden. But Linden won't let her. He just don't want her to die. And I get that, but I wanted her to be able to choose for herself; not to be more tortured by Vaughn and his medicines. Sigh.

But anyway. I loved reading this from Rose's point of view. And while I don't really like Linden, I can understand why she loves him. He's kind of pathetic, and he knows nothing about his dad, but he's also kind of sweet. And he does need some protection. But yeah. I don't like him much, still. But this short story is five stars, because Rose is an amazing character. If you have read Wither, then you really should read this short story, because it is pretty amazing :) Go buy it.

Goodreads - Buy it
My Book Recommendation of Wither.
Posted by Carina Olsen at 7:12 PM