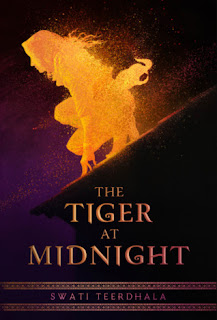 THE TIGER AT MIDNIGHT BY SWATI TEERDHALA

Esha is a legend, but no one knows. It’s only in the shadows that she moonlights as the Viper, the rebels’ highly skilled assassin. She’s devoted her life to avenging what she lost in the royal coup, and now she’s been tasked with her most important mission to date: taking down the ruthless General Hotha.

Kunal has been a soldier since childhood, training morning and night to uphold the power of King Vardaan. His uncle, the general, has ensured that Kunal never strays from the path—even as a part of Kunal longs to join the outside world, which has been growing only more volatile.

Then Esha’s and Kunal’s paths cross—and an unimaginable chain of events unfolds. Both the Viper and the soldier think they’re calling the shots, but they’re not the only players moving the pieces. As the bonds that hold their land in order break down and the sins of the past meet the promise of a new future, both rebel and soldier must make unforgivable choices.

I am pretty curious about this book :D That cover is stunning. And the book sounds pretty exciting too. I have not heard anything about it yet, though, ack. But, I have traded for an ARC of it which will be arriving later this month, and so I cannot wait to read this book :D I think and hope I will love it. Sounds awesome.
What are you waiting for on this legendary Wednesday?
Posted by Carina Olsen at 6:00 AM