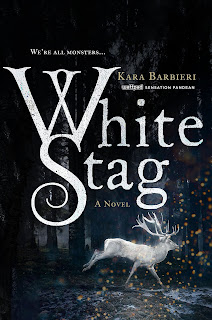 This is not a book that I would have picked up by myself. I had not heard much about it at all, before the blog tour. But I am so thrilled that I ended up reading it. Because it was pretty amazing. A four star read for me. A few things bothered me, but this book was exciting from start to finish. I'm so glad I picked this book up.

Though I must admit to having read reviews right before I started the book. Which I shouldn't have done. Felt for sure that I would not like White Stag because of reviews I had seen. I was wrong. I got sucked into this book, the world and this story. It did not let me go until the very end. And I enjoyed all of it very much. Sigh.

Yes, there were a few parts that I disliked with a passion. But I never hated this book. And truly enjoyed reading it from start to finish, always needing to know what would happen next. Writing was not fully perfect, but I did not have trouble connecting to the characters or the world, so I am happy with that. For most of the book this was a solid four star reading for me. Sometimes three, because of some things that happened in the past that I couldn't get over and that were mentioned a bit too much for my taste. But the story was so good. The characters were awesome to get to know. And I loved this world a whole bunch. While I did not completely love this book, I enjoyed it something fierce. And am so glad that I read it. Think that you should all give it a try too.

This book tells the story of seventeen year old Janneke. Except she is not really seventeen. Which I did not know before starting this book, which was a huge surprise for me. She has been living in the goblin world for the past one hundred years, her body not aging. It is not a safe world for a human. She's been doing pretty well, though. I enjoyed learning about the goblins. They are described in so many different ways. Mostly human looking, but eating all things living. Most of them pretty horrible. But not everyone.

Like Soren. The goblin that has been a friend for Janneke for a hundred years. He has lived for almost a thousand himself, though. All those years alive were maybe a little too much, but it was interesting too. I liked getting to know about the goblin world and how they lived and such. I do wish there had been even more of all of it. But oh, Soren. I loved this boy a whole bunch. He was pretty fierce and strong  yet gentle and loving too. Though maybe a bit too human at times, hmm. Yet I could not help loving him so so much.

The story in this book is how there is a new goblin king to be chosen. The book begins with the old king dying, the stag running. Those that are strongest in this world will hunt down the stag, killing it, and taking the place as the next king. Soren is one of the strongest goblins there are. And so he will hunt it, Janneke going with him. They start growing a lot closer over those few days hunting. Janneke learns more about herself, learns more about how to deal with her past and all of that. And how to care for Soren differently.

There is romance. But there has been no romance between Soren and Janneke for one hundred years, which is how long she has been with him, mostly as a friend. He has treated her kindly for all those years. And they have grown close. I do wish it had been more about those previous years, though. I wanted to know more. Hmph. It takes a lot of time for Janneke to admit to feeling more for him, for the romance to start. But once it did, it moved pretty fast. I did not mind, though. I shipped them together so very much.

The reason for why I had some problems with this book is because of four months that happened when Janneke was first captured by the goblins, after her whole village had been killed and burned down. She was the only survivor, and a goblin man decided to capture her as a toy for himself. She was tortured and raped for four months alone with him. And there are some details in this book. And they are often there. It was too much for me. Not too brutal, as it could have been, but still too much. Also, it was heartbreaking.

But despite that, the book was good. Janneke had focused too much on what happened to her in the past. I felt like maybe she should have gotten more past it by now, considering one hundred years had gone past, where she had not spent time with this man. Hmm. She acted too much like a child at times, when she should not have been one, since she is a hundred and seventeen years old. Hmm. But I also adored her. So much. Janneke was strong and fierce and an awesome warrior too. I did love her much.

There were also some other great characters in this book. While it focuses most on Janneke and Soren, there are others in this story too. I adored the young goblin girl that were with them for a very short time. Sigh. And then the boy that ended up spending time with them after her. He was pretty adorable and I liked reading about him too. A few bad guys in this book as well, and I disliked them a bunch. But they were all written pretty well and I liked how the story went about all of them. Mostly awesome characters.

White Stag was more than I had hoped it would be. And I am so happy about it. The world was stunning and written well. The characters were amazing. And the story was exciting and thrilling at times too. The ending was pretty much perfect, though I know there are two more books to come. Ah. I'm nervous, haha. But pretty sure I will continue with this series. Want more of the characters. I also did not know the whole Wattpad story before, but I am so curious to know more about it. Also think that it seems pretty awesome.

When I had the chance to take part in the blog tour for this book, I could not say no. Because that cover is killing me with beauty. And the summary sounded awesome too. Was thrilled when I got accepted for the tour, and could read a copy of this book too. My Q&A post will be up in January. So excited for that. Huge thank you to Wednesday Books for letting me take part in the blog tour and for sending me this eARC to read and review via Netgalley. I cannot wait to pre-order a hardcover of this stunning book too. Go read it.