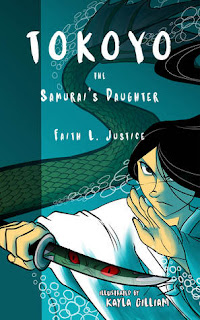 I have no idea where to begin with this book. I was asked by the publisher if I wanted to read and review it, and while I don't do that very often, I decided to give this book a try, because it looks pretty awesome and sounded exciting too. I had hoped that this would be an exciting and epic adventure. But it was not. Not even a little bit.

Which is a bit disappointing. My review won't be very long, as this book took me less than an hour to read. It was very short, and not that good either. Giving it two stars, as I felt like it could have been a great story, if only it had been written a bit better, and been a lot longer. Instead it ended up being pretty much of a disappointment.

I shall start with the writing. I suppose that it wasn't all bad, but it was not a writing for me at all. It's set in year 1300 something, in Japan. I felt nothing about this history, because the writing wasn't good, and nothing was described. The book is really truly all kinds of short, and so nothing really happens. This is not a book to read if you wish to read about old Japan. I don't know how old this main girl was supposed to be, but I think she was a young teenager. The reason for why I also had such issues with the writing was that in the beginning of the book, the girl thinks that if her father died, she would die too, and that she would have nothing to live for. And that's just. Yeah. Not a story for me at all. Ugh. Big thank you to the publisher, for sending me a copy of this book to read.

I really do not have much to say about this story. It was really short. And I did not like it much, I'm sorry to say. I wish this could have been a book for me. There are some kind of cute illustrations included, though those weren't that amazing either, sadly. I do think that some people could enjoy this story, but I was not one of them. I didn't like the writing, and I found the story to be way too fast and full of flaws. It's about a young girl who lives with her father, a samurai. It's mentioned often, but never shown. Should have been.

Then her father is accused of doing something she knows that he could not have done, and so he is sent away. She loses her home, and is full of grief. I felt nothing for this, simply because it was not written well enough to me. I didn't feel anything for this girl, as there was no personality there at all. After a year, she finally goes after her father, to live in exile with him. Just. Not good. There is even a sea dragon included. Story was too short, and too weird, and not good enough for me. But I am kind of glad that I gave it a try.