Review: Daughter of the Siren Queen by Tricia Levenseller 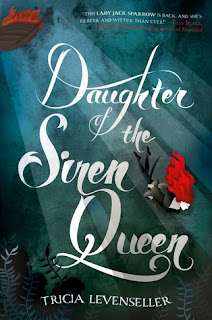 I have no idea where to begin with this book. I was expecting to love this second book a whole lot, as I had heard lots of people love it. Was promised romance and exciting moments. That was not what I got at all. And I'm so beyond disappointed in this book. Sadly, giving this one a two star. Sigh. Wishing it could be higher.

But I have so many reasons for disliking this book. Probably not going to share all of it, as I kind of just want to be done with this book. But will share most of why I did not like it one bit. And I'm so sad about it, because I really enjoyed Daughter of the Pirate King. It was excellent. And this sequel was most definitely not.

I have to say that when I see people who loved this book, I have no idea how we even read the same thing. As I cannot imagine loving this story at all. Ugh. I mean, it is good to have different opinions. And I don't mind that at all. I'm just really disappointed right now, as this book could have been epic. And it was so not. Really liked the writing in book one, but it was so different in this sequel. At least it felt like that to me. I didn't connect to the story at all. And the writing bothered me from start to finish. Which makes me so sad, because I had no issues with the first book. And with this sequel, all I had was issues. In book one, I loved the main character so much. Alosa was fierce and kind and so awesome. In this one? Hahaha. I hated her. For many reasons.

I don't even know where to begin. There is so much about this book that made me so angry. I cannot deal with how this book made me feel. And none of those feelings were good. So I shall start by saying what I liked about this book; as there were a few things I did enjoy, which is why this is a two star and not a one star. I found the setting to be interesting, I liked the pirate parts. I liked getting to know about the sirens. It wasn't that good, but it was exciting at times. Some of the characters were great. But yeah. That was all.

The rest of this book was not good. I mentioned after my re-read of book one, that the reason for why I didn't fully love that book was because of the weird jealousy things in it. With Alosa kissing someone that wasn't Riden. And then it was even worse in this book. No love triangle. But Alosa kisses someone again. It bothered me. And then the beginning of the book. Alosa has been ignoring Riden for two whole months. Kept him inside the ship, never seeing him. Then first time seeing him again, she lies that she has a lover.

And she doesn't tell him differently until the end of the book, months later. What the hell. I hated this girl. I hated her beyond words. She was great in book one. But in this one? Not. She was selfish and petty and rude as hell. I couldn't stand her. She treated Riden like total crap. He did not deserve that at all. And she treated her crew, aka her family, like crap most of the time. They could have been so interesting to read about, but not once did I see her have a good talk with them. And not once did I get to know any of them.

I simply couldn't stand Alosa. She was a total asshole in this book. Which is a word I have stopped using in my reviews. But I couldn't ignore it this time. Because, gosh, how I hated this girl. I'm not mentioning all the reasons for why she bothered me, as I do not have the energy for that. Oh, wait. There was another thing, when someone leaves her, for a very very obvious reason, and she gets so mad and angry at this person, and she doesn't let it go. Like. How stupid can she be? I thought she was way smarter than this.

But she was not. Alosa was not smart in this book at all. She was so selfish and simply all kinds of awful. I hated how she was with Riden. He loves her. And he is obvious about it. Yet she claims not to see that. Hahaha. And she claims that she hates him, and blah blah blah. I got tired of it real quick. There are hints of romance in this book. But it was not romantic. It wasn't swoony. It was simply not good. Alosa was too much of an asshole for this romance to be good. She ruined it at every moment, and for no reason at all.

I'm not going to say more about this book. Already written more than I wanted to. I just. It makes me so angry. And now I just want to forget about it. But yeah, big thank you to Kelly for trading this ARC to me. It's precious to me, as it is gorgeous, but gosh, how I hated this story. Daughter of the Siren Queen was incredibly disappointing. And I wouldn't really recommend it to anyone. Yet I have seen many love it, so I guess most people will. But I really did not. This book does have a lot of pirates, death and sirens though.